A SECOND salvage contractor to complete part of the RM30mil Sungai Melaka cleaning and beautification project (Package One, Phase Two) is about to be appointed.

The project was stalled two years ago.

Water and Environment Ministry secretary-general Datuk Seri Dr Zaini Ujang told Bernama that the contractor would be given approximately 18 months from the date of appointment to complete several development components under Package One.

“Phase Two of the Sungai Melaka Cleaning and Beautifi-cation Project has been divided into three packages with Packages Two and Three already completed and handed over to the Melaka government in 2018.

“While under Package One, several development components have been delayed,” he told reporters after accompanying the Yang di-Pertua Melaka Tun Mohd Ali Mohd Rustam during a visit to the area.

According to Zaini, the ministry is committed to ensuring the new salvage contractor could complete the remainder of the project within the stipulated time.

The RM350mil project was launched in 2012 to clean 5.2km of the river, beginning from Jalan Hang Jebat to the Batu Hampar tidal control gate. 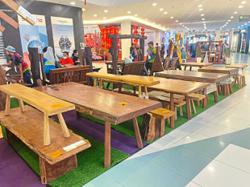