Hee with agencies, NGOs and other stakeholders involved in the evaluation session in Ampang.

Selangor government is confident that it has fulfilled requirements for the Gombak-Hulu Langat (GHL) Geopark to be formally recognised as the state’s first unified national geopark.

“Representatives from the National Geopark Evaluation Committee will be visiting the geosites as part of the assessment process,” said state tourism, environment, green technology and Orang Asli affairs committee chairman Hee Loy Sian at the launch of the evaluation session in Ampang.

The Ampang Jaya Rimba Collective hopes the national geopark status will bring more awareness to the need to preserve the area’s natural assets.

Its coordinator Noina Baharuddin said Ampang Jaya was an environmentally sensitive area and some areas were classified as disaster and a hazard risk.

“Any development must place emphasis on sustainability,” she said after a presentation to the national geopark committee.

The GHL Geopark evaluation by the national evaluation committee started on Aug 16 and ends today.

In a related matter, Hee said the state was looking at the possibility of acquiring some 240ha of individually owned lots at the foothills of Bukit Tabur, Ampang Jaya, in an effort to safeguard the environmentally sensitive area.

He said the proposal would involve identifying replacement land elsewhere for landowners.

Bukit Tabur makes up a part of the Gombak Selangor Quartz Ridge, the longest pure quartz dyke in the world.

“There are about 300 lots that have been identified as privately owned since 1924 and are currently zoned as agricultural land,” said Hee.

“There are owners who are now keen to develop their land. But this would have an impact on its geology as well as the state’s plans to seek national geopark status.”

He said the proposal was one of the long-term solutions being explored, following recent reports of land-clearing activities at Bukit Tabur.

“The matter was discussed at the Selangor Economic Action Council meeting and we have instructed the land office to study the proposal.

“We will also have consultations with the landowners.

“In the meantime, I want to remind owners to not carry out any land-clearing works without approval,” he added.

In July, it was reported that a large area of Bukit Tabur had been cleared for a durian orchard and other eco-tourism activities.

“We have asked the owners to cease clearing works and new proposals will not be allowed until further notice,” MPAJ secretary Julaihah Jamaludin said. 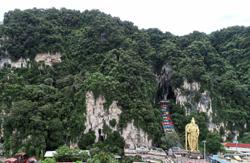