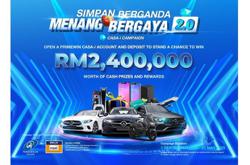 Nor Azam (eighth from left) and Tey (fourth from left) take a commemorative photo with the winners of the ‘Simpan Berganda Menang Bergaya’ campaign during the grand draw prize giving ceremony, held at Menara MBSB Bank in PJ Sentral on Aug 4.

Officiated by MBSB Bank chief executive officer Datuk Nor Azam M. Taib, the ceremony was held at its head office in Menara MBSB Bank, PJ Sentral and was also streamed live to allow its customers to join the ceremony virtually.

Emerging as the top winners of the “Simpan Berganda Menang Bergaya” campaign were 63-year-old Negri Sembilan resident Huang Wee Wan, who won a BMW X4 30i M Sport, and 81-year-old Maznah Harun, who hails from Terengganu and went home with a BMW C400X scooter.

Huang, who was delighted with her win, has been a customer with MBSB Bank for a number of years and participated in the campaign on a recommendation from an MBSB Bank employee.

She said, “I happened to be at an MBSB Bank branch last year and one of the staff recommended that I open an MBSB Bank savings account and join the campaign. I decided to give it a try, but I certainly didn’t expect to win!”

“Previously, we were not customers with MBSB Bank, but I got to find out about MBSB Bank when my cousin told me about this campaign and I decided to join with my daughter and son,” Maznah said. MBSB Bank aims to be a bank that delivers value to its customers, says Nor Azam.

Afiqah added, “After my grandmother’s win, the rest of my family members also want to start saving with MBSB Bank, which we will continue to do from now on.”

Held from June 21, 2021 until May 31 this year, the campaign had eight draw categories, namely monthly, quarterly, digital, new savers, loyalty, regional, special as well as the grand prize, in which 1,265 customers were eligible to win.

The campaign also resulted in significant growth, where 28,718 new accounts were opened during the campaign period.

Commenting on the campaign’s success, Nor Azam said the event not only celebrated the winners, but also the customers who put their trust in MBSB Bank.

“The purpose of the ‘Simpan Berganda Menang Bergaya’ campaign is to tell Malaysians that MBSB Bank is a bank that is going to provide value to our customers and we are very serious in doing this, as an Islamic bank that puts our customers’ value as the top priority.

“We are grateful to our customers for the overwhelming response that we received for the ‘Simpan Berganda Menang Bergaya’ campaign.

“This keeps us inspired in improving our products and services, as MBSB Bank continues to effectively promote good practice in financial management for our customers’ improved financial well-being.”

Following the success of the first campaign, Nor Azam also pre-launched the second series of the campaign, “Simpan Berganda Menang Bergaya 2.0” during the event, along with MBSB Bank consumer banking head Tey Jing Ying.

“Our customers are at the heart of everything that we do and through this campaign, we will be able to reward our loyal customers and concurrently, attract new customers.

“It is also an opportunity to increase our customer base and by doing so, enable us to share our new products with them – be it for financing or savings,” he said.

On how “Simpan Berganda Menang Bergaya 2.0” will differ from the first version, he noted that although the mechanics of the campaign will be the same, the prizes will be catered to the needs of the different groups of customers under the separate draw categories.

The “Simpan Berganda Menang Bergaya 2.0” campaign will commence on Sept 1, 2022 until May 31, 2023. Participation is open to individual customers with MBSB Bank’s current or savings accounts, with a minimum deposit of RM100.

New customers who are interested to participate in “Simpan Berganda Menang Bergaya 2.0” can open MBSB Bank’s PrimeWin current or savings account (CASA-i) via its M Fast online application, or alternatively, visit any of the 47 MBSB Bank branches located nationwide.