More than putting food on the table

By GRACE CHEN And MEGAT SYAHAR Ng's hobby has expanded into his neighbour's space and he has incorporated aquaponics, hydroponics, and traditional straight-to-soil farming techniques.

EVERY Sunday during church service, a “green table” is set up, to give away vegetables from a community garden.

The vegetables are grown along a small strip of land about 150m from the Sungai Way-Subang Methodist Church at Kampung Sungai Kayu Ara in Petaling Jaya, Selangor.

It is part of an aquaponics project that combines fish rearing and using fish waste as nutrients for plants.

Set up in April 2021, the project was funded by the Selangor Environmental And Green Technology Small Grant programme which awarded the church RM20,000 for its aquaponics project.

At the site is a DIY greenhouse where plastic sheets form walls so that sunlight can enter while keeping out pests.

To cool the air for optimum plant-growing conditions, water runs through a wall of radiator coils, said church pastor Dr Ng Swee Ming who is also head of the aquaponics project.

The water used is part of the filtration system for the tank which currently hosts catfish fry, the project’s second batch of fish.

The church’s first batch of 100 tilapia were harvested on May 30 during the official launch which was attended by Bandar Utama assemblyman Jamaliah Jamaluddin and Kampung Sungai Kayu Ara village head Ramli Daud.

Also thriving in the greenhouse are vegetables growing in the nutrient-rich water.

Some were floating in polystyrene boxes with holes cut out at the base for the roots while others were sprouting from Dutch buckets filled with river stones.

Brazilian spinach, watercress, wolfberry leaves, French beans, okra and water convolvulus were some of the vegetables seen flourishing at the plot.

Next to the plot, the church has a two-storey corner lot house which is used as a skills training and tuition centre.

The skills centre head Lam Kuan Lock, who is also a member of the village council management committee, had mooted for the church to apply for the state grant.

“There are no records on the amount of vegetables that had been harvested since the project took off last year, but those in the community who are in need know that they can always come here for free vegetables and fish,” said Lam, who is one of five people working on the project.

He said that about 100 families have received fish, in addition to vegetables.

When asked why the church had embarked on the programme, Lam said that the aquaponics project was also part of the church’s aim to educate the community.

“We have a kindergarten and the children can come to see how food is grown. It teaches them not to waste food,” said Lam.

He said another objective of having the aquaponics project was also to provide food with better nutritional content to the community.

Lam pointed out that food aid packs are usually made up of dry, preserved and processed foodstuff, whereas a bunch of fresh vegetables would be much healthier than providing a tin of biscuits.

Besides heading the aquaponics project, Dr Ng has been growing his own food for the last 15 years.

His home in Subang Jaya has a thriving garden with about 20 varieties of vegetables and herbs.

Dr Ng’s plants are not only confined to his own garden; he has taken over his neighbour’s plot as well with the latter’s permission.

Dr Ng also has a veritable collection of gadgets to monitor his plants.

There is a moisture reader for his tarragon plant, a solar-powered fan for the mushroom incubator, plus a network of micro drips and pumps attached to his hydroponic and aquaponic sets.

There is even a small aquarium to house fish fry and are isolated so they don’t end up being eaten by adult fish.

“The giant gourami has grown so big that it is unable to fit into my wife’s pan.

“We’ll have to take it to a restaurant to have it cooked,” he said.

Besides sustaining him and his family, Dr Ng’s gardening efforts yield enough produce to be given away to close friends and neighbours.

Located at Jalan Mohet, the organisation the fish tanks are located at the compound of its shelter.

In the garden with vegetables and banana trees, are six huge tanks filled with iridescent sharks.

This breed was chosen for its hardy nature.

“Space was never an issue for us. We knew that as long as we were willing to work hard, we would eventually be rewarded,” said the centre’s executive and educational director Dr Ng Oi Leng.

The organisation had previous experience with aquaponics.

In 2016, the German Embassy donated RM20,000 to set up a system so that the organisation could create a source of income to sustain its operations.

After finding out that up to 40 fish could be harvested after 10 months, the organisation decided to proceed with the venture.

Daily care of the fish is being handled by two staff, one of whom is a Cuban national.

The project is still at the testing stage but the next harvest is expected this September.

If all goes well, the organisation can expect close to RM15,000 from the sale of iridescent sharks from one tank.

“As we are located next to the St Barnabas church, we have a ready market.

“There are some 6,000 church members in Klang alone, so we are confident that we will be able to find a market for our fish,” said Peter Gan, director of Life2life, the social enterprise arm of the centre.

Plans are afoot to maximise potential income from the fish farm.

Having just received 100 Sultan fish fry from a donor, the centre is hoping to include this species in its fish farming programme.

“If we can raise this species successfully, we should be able to triple our income,” said Gan.

The students pay RM50 each a month as a token fee. 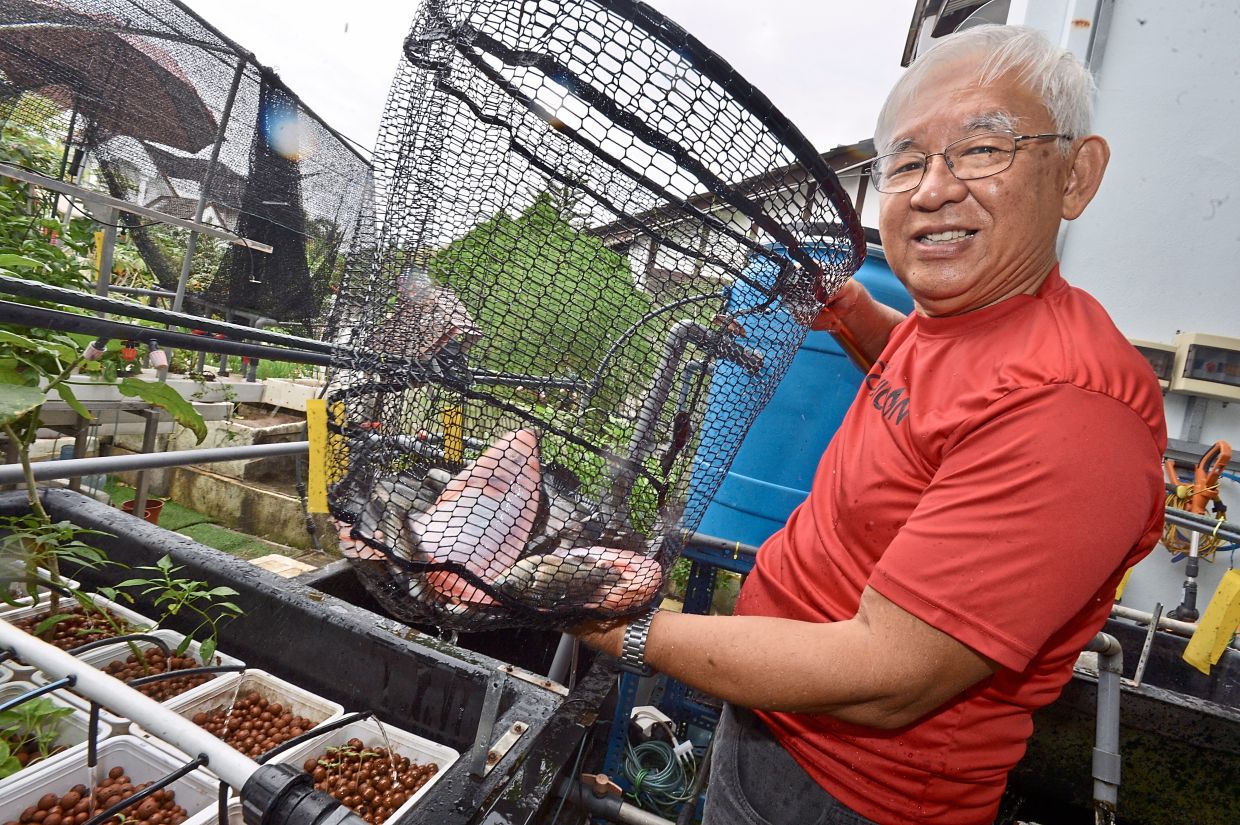 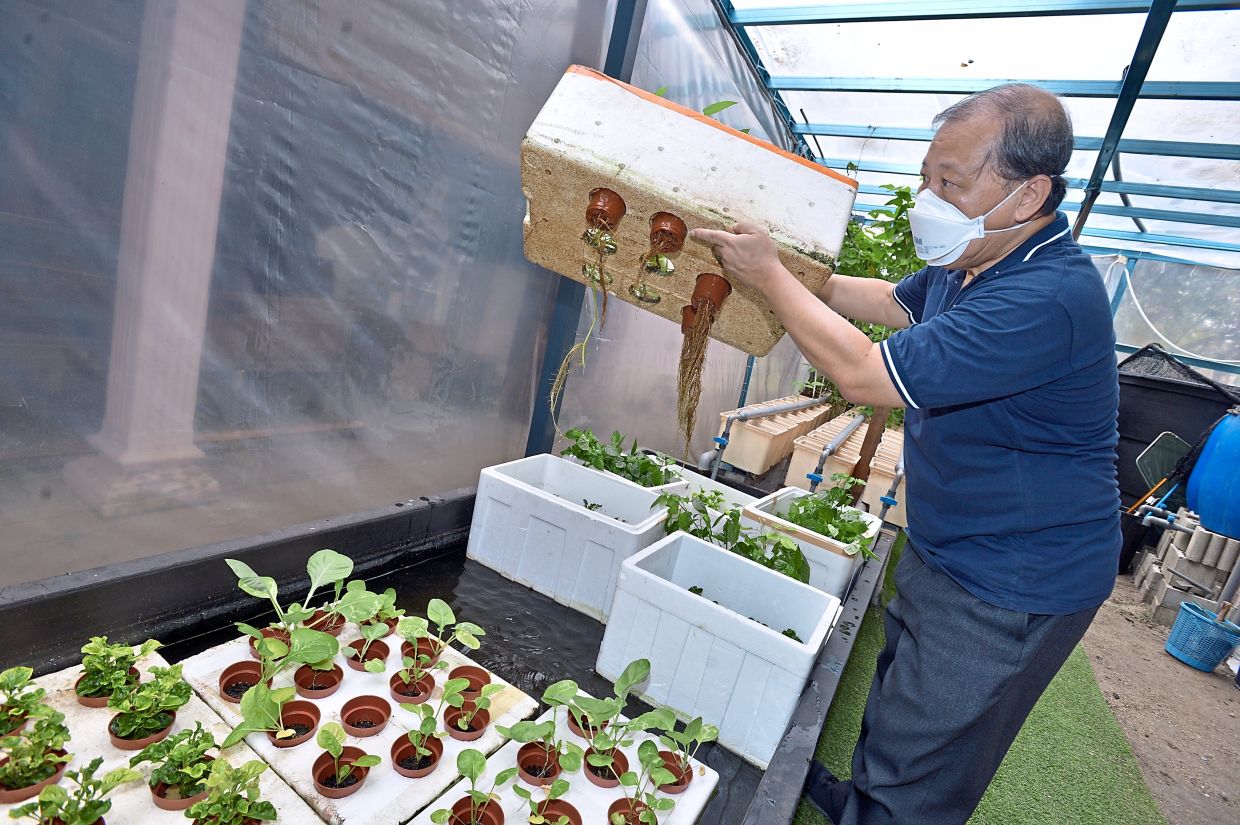 Ng's hobby has expanded into his neighbour's space and he has incorporated aquaponics, hydroponics, and traditional straight-to-soil farming techniques.

Dr Ng breeds various fishes in a single aquaponics tank, a fish could reach up to about 40cm in length.

Lam says the food produced is distributed to the local community.

The fish breeding tanks at Elshaddai in Klang are handled by two workers.

Gan says there is a ready market for the Elshaddai’s fish.