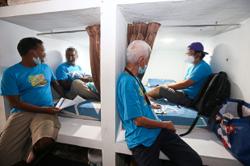 MISSING manhole covers along walking paths in Bandar Botanic, Klang pose a danger to the public.

Bandar Botanic Residents Association (BBRA) committee member Jacob Mathews said manhole covers and metal grates at certain stretches within the neighbourhood park and in the commercial area were ripped from their hinges, most likely stolen and sold for scrap.

“Five out of eight manhole covers on every foot path here are missing.

“In Bandar Botanic, the manholes are under the purview of Klang Municipal Council (MPK), which has not replaced these missing covers,” he said.

Resident, K.C. Chen, 46, who does morning brisk walks near Jalan Rhu 3/KS6 within Taman Tasik Botanic, said the gaping manholes along the walking path were putting adults and children at risk.

“Residents have brought this up to the local council but it is not treated with urgency,” he said.

Social volunteer Mohd Ali Jinnah said he noticed that there were ehailing ride passengers who would use the walking path when they get down in the area.

“I am worried as there are several manholes along the footpath without a cover or grate.

“People using the path can be injured if they fail to notice the gaping holes,” he said.

Businesswoman and mother of four, Azita Mohd Ali, who lives in Bandar Botanic, said the missing manhole covers at various locations in the neighbourhood was a bane.

“Area councillors must not drag their feet on this matter.

“They must get MPK to refit the exposed manholes with concrete covers, as such covers have no resale value and thefts will be curbed,” she said.

Azita further said that residents did not want slipshod work, where concrete covers were ill-fitting over the manholes.

“We want covers that fit properly, so that pedestrians do not end up injuring their feet,” she added.

Mathews said he noticed that the walking path along Jalan Cassia Utama, which had some 15 manhole covers missing for months, had been closed with concrete covers last week. 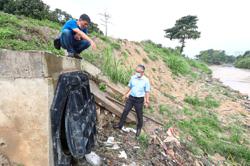