By Venesa Devi and A. Thirumalni: Johor State Assembly 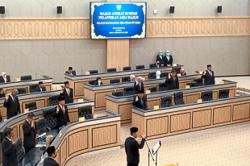 THE state government needs to double its efforts in attracting investors and boosting the economy in order to reach its goal of 7% annual economic growth, says Johor Mentri Besar Datuk Onn Hafiz Ghazi.

He said that while the goal seemed high, it was possible to achieve if the right measures were put in place, especially in the investment sector.

“We can reach it if we take big leaps.

“Business cannot be as usual. There is a need to increase efforts to stimulate the economy.

“We need to attract quality investors from sectors such as oil and gas, petrochemicals, electrical and electronics.

“We also need to further expand our food industry,” he said in his winding-up speech during the state assembly sitting at Bangunan Sultan Ismail, Kota Iskandar, Iskandar Puteri.

Onn Hafiz noted that in the past decade, Johor had achieved annual economic growth ranging between 5.3% and 6.2%.

“We have the Iskandar Malaysia region which includes Johor Baru, Kulai and parts of the Pontian district.

“We also have the East Coast Economic Region (ECER) which covers areas in the Mersing and Segamat districts.

“The Southeast Johor Development Authority (Kejora) is a development agency for areas in Kota Tinggi and Kluang.

“We will also have other important economic hubs in several districts in Johor.

Major projects such as the Rapid Transit System Link (RTS-Link), the electrified double- tracking rail between Gemas and Johor Baru as well as upgrading works on the two Customs, Immigration and Quarantine (CIQ) centres would also be enablers for economic growth, said Onn Hafiz.

On the tourism sector, he said the state government would continue to use “Majestic Johor” as a brand to further promote the beauty and uniqueness of the state.

“The state is truly gifted with natural beauty.

“We have six national parks, about 130 islands and 18 mountains.

“In fact, many people have described the islands in Mersing as the Maldives of Malaysia because of the clear water and white sand.

“With all of these attractions, Johor has the potential to be a top holiday destination,” added Onn Hafiz.