INDUSTRIAL development in Bertam, Penang, must be based on high technology and involve highly skilled workers.

“I was told that the area was poised to be developed as an industrial area and if so, it must be a high-technology area,” he said.

Speaking after the launch of the Esport Youth Cabin in Kepala Batas, Reezal Merican reiterated that he did not agree with the proposal to build centralised labour quarters (CLQ) in Bertam.

He had indirectly informed the developer of his concerns as well as voiced out his stand to the Seberang Prai mayor.

Reezal Merican, who is also Housing and Local Government Minister, said it was not suitable to build the CLQ in a residential area and that it would affect many traditional villages.

He, however, said this did not mean that he had rejected industrial development in Bertam.

“I will not allow any so-called ‘backyard industry’ in Bertam as this will cause an influx of foreign workers,” he said, referring to low-tech factories employing low-skilled workers.

He added that he would request the state government to list the types of industries that would be suitable for Bertam.

It is understood that the development project in Bertam, which is in the process of obtaining planning permission, has two packages. 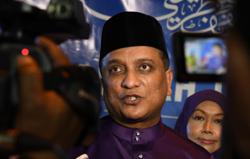