This is to prevent waterlogging because of choked drains that are filled with wild vegetation, silt and rubbish.

“Contractors are working in stages throughout this week as part of a nine-month operation to desilt all monsoon drains to ensure smoother flow of surface runoff before the monsoon season in October,” he said after conducting a site visit in Lintang Besi to check on the work progress.

MPK has appointed 23 private contractors, with some using excavators, backhoes and shovels to remove large amounts of rubbish, sludge and sand.

MPK’s contract with the private contractors is until the end of February 2023.

“It is timely to remove rubbish, sludge and sand from monsoon drains as the ongoing southwest monsoon means less rainfall and more dry days,” said Zaireezal.

He said a budget of RM4.1mil had been set aside for the monsoon drain clean-up work.

“I will also visit Taman Melawis and the housing areas along Jalan Mengkuang to check on the neighbourhood drains as we want to ensure all water channels are cleaned thoroughly by KDEB Waste Management.

“If the drains are not clean, fines will be issued to the contractor,” he added.

MPK Environmental Health officer Woo Lee Tay, who was accompanying Zaireezal, said dirt collected after the desilting process would not be allowed to be left on the roads or grass verge.

The department plans to complete most of the work in September to curb flash floods. 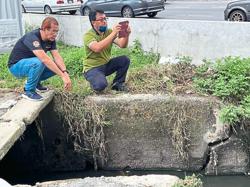