IN the end, Jagdev Singh comfortably topped the MetroSport Forecast Challenge, but not before some real close calls leading up to the end-of-season run-in of the English Premier League.

The Challenge, designed for the StarMetro football pundits and based on predicting the outcome of four selected Premiership matches each week with a system that rewards the exact scoreline with 40 points and 10 for the correct result (win, lose or draw), remained largely close until well into the second half of the season when long-time Liverpool fan Jagdev pulled away.

And even then, he had Ivan Loh, another Reds’ supporter, on his heels for a while.

Jagdev finished the season-long campaign with 1,230 points, leaving Ivan to finish runner-up on 1,070 and Shaun Orange, who predominantly writes about champions Manchester City, in third place with 980 points.

Randeep, winner of the Challenge last season, said: “It proved rather entertaining again, although in the end Jagdev proved too strong.

“He really capitalised on Man United’s scores, almost all the time correctly forecasting their demise.

“Ivan made a good thing of it even after surrendering his lead to Jagdev, but in the end, the difference was a little too much to make up.

“We’ll see what next season holds. Perhaps we could try amending the format to allow a few others to join in the fun.” 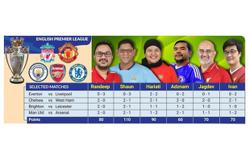 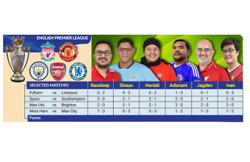