Onn Hafiz operating an excavator at the ground-breaking ceremony of the new administrative centre in Bandar Newpark, Kluang.

KLUANG will see the development of new projects, including government buildings, to benefit those living and working in the district.

Johor Mentri Besar Datuk Onn Hafiz Ghazi was in the district to attend a ground-breaking ceremony of a new government administrative centre in Kluang town.

He also attended a briefing on planned development projects in the area.

In a statement, the company said it would also bear the cost of developing public facilities, including widening and upgrading Jalan Batu Pahat from the Revertex traffic light junction to the Taman Desa junction, as well as the main road of Bandar Newpark at a cost of about RM15mil.

The ring road will improve accessibility to the new administrative centre as well as reduce traffic congestion along Jalan Batu Pahat-Kluang.

This development has also succeeded in attracting international brands to invest in Kluang, including a hypermarket chain, which involves a cost of RM35mil.

“Geographically, Kluang town is bordered by Sungai Mengkibol and the railway.

“There is is no more area to be developed with the increased population of Kluang town.

“The double railway track project, which is expected to be operational by the end of 2023, will further boost Kluang’s economy.

“Therefore, a secondary city needs to be developed,” said the developer in the statement, adding that Bandar Newpark would span 104.4ha.

Earlier this month, the developer handed over land worth RM40mil at Bandar Newpark for the construction of a District Office, Kluang District Land Office, as well as Kluang Municipal Council. 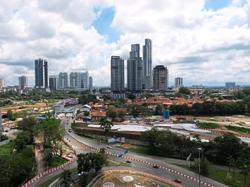