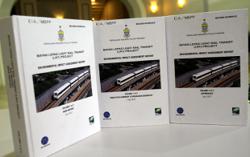 TO SHOW what it is like to do dirty, dangerous and difficult work, a community leader jumped into Sungai Pinang, known to be among the dirtiest in the country.

The man, MCA social movement bureau head Cheah Chin Woon, waded through the black water with a net in hand to collect floating bottles, plastic bags and other waste.

“I am jumping into this black river to increase public awareness.

“I hope to educate and discourage people from throwing rubbish without thinking,” he said before taking the leap.

Venting his frustration at the local government, Cheah claimed that the river, which narrows into a canal in stretches, had not been cleaned regularly.

“Politicians may blame the people for littering.

“But in fact, there wasn’t so much rubbish initially.

“It’s just that the authorities have not cleaned the river regularly, leading to the accumulation of rubbish.”

Cheah sarcastically referred to Sungai Pinang as “Koi River”, after his friends from Kuala Lumpur mistook objects floating in the river for Koi fish.

He spent about 30 minutes wading through the river while other MCA members helped him haul up the trash.

He said MCA treasured the opinions and participation of youth.

“Newer ideas and perspectives can be nurtured through our platform, and opportunities are made available for young adults to serve the people.

“I have always encouraged MCA members to follow two principles – courage and motivation.

“There is no need to be afraid of an attempt which others feel could have been better, because if we serve the greater purpose of democracy, the people will eventually acknowledge our efforts.

“I hope Cheah and his team will continue to highlight issues which may otherwise go unnoticed,” he said.

Tan said the “black river” effort revealed the flaws of the current administration and called for a practical plan to be initiated.

“I hope more youths would be inspired by our passion to serve the community.

“Anyone who loves to serve the community is welcome into our big MCA family.”

These included old sofas, beds, refrigerators and even motorcycles.

“It is a total lack of civic consciousness.

“The effectiveness of our efforts is limited as we don’t have control over people’s attitudes.

“We should look at Singapore and other countries that have been able to achieve clean rivers because people do not dump rubbish into them,” he added.

Zairil said the river was much cleaner during the implementation of the Covid-19 movement control order when there were fewer people out and about.

Sungai Pinang is believed to be one of the most polluted rivers in the country.