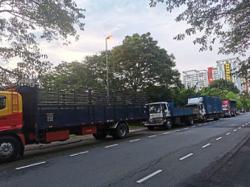 They said vehicles parked along the yellow line are blocking off one of two lanes on the sole access road to several condominiums in the area.

Several complaints were made to DBKL and summonses had been issued against the motorists.

However, the problem persists.

Diane Douglas, 48, a resident at 10 Mont Kiara, said the vehicles were obstructing traffic.

“We see the same vehicles park here almost every day. The car owners who work nearby are taking advantage of the free parking and shaded stretch.

“There is ample parking space at the commercial lots,” she said.

“DBKL should tow the cars away as summonses did not seem to be helping the situation,” she added.

Another resident, identified only as Chong, 41, said the illegally parked cars were blocking the turn-off to the Jalan Kiara main road.

“Sometimes, the illegally parked vehicles cause a traffic gridlock all the way to the roundabout in front of 10 Mont Kiara.

“This makes it difficult for other vehicles to make a U-turn along the road.”

Expatriate Niels Jensen, 53, from Denmark, who lives at 11 Mont Kiara, said the vehicles were causing congestion in the area.

“It used to take two minutes to get to the commercial area, but now it can take up to 15 minutes,” he said.

“The management and other condominiums’ management offices have lodged numerous complaints with DBKL but there is no change.

“This has been going on even before the Covid-19 pandemic, and the situation is getting worse.

“Jalan Kiara 1 is a private road. The handover process of the road from the developer to DBKL has not been finalised,” he said.

“This is very dangerous,” he warned.

“We complained to DBKL in January but the situation is still the same,” she said.

10 Mont Kiara JMC chairman Hiten Asher said some motorists even parked on the zebra crossing, hindering pedestrians as well as those in wheelchairs or with baby strollers.

“We are exploring the idea of placing bollards to stop people from parking by the roadside,” he said.

When contacted, developer UEM Sunrise confirmed that the handover of Jalan Kiara 1’s infrastructure and maintenance was in progress.

“However, Jalan Kiara 1 was gazetted by DBKL as a public road on Dec 29, 2011,” said a spokesperson from the company.

“As such, we believe it is within DBKL’s authority to issue summonses or conduct any other enforcement action to ensure traffic management.

“The developer has been in constant communication with DBKL about the handover process,” she added.

In a statement, DBKL said Jalan Kiara 1 and Jalan Kiara 4 were hotspots for traffic offences and it had constantly issued summonses to errant motorists.

“DBKL will continue to take action and tow away illegally parked cars after Hari Raya Aidilfitri.” 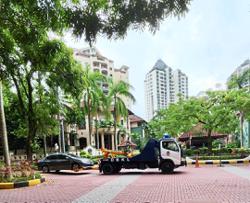