Business owners at the Laman Rimbunan commercial area in Kepong want DBKL to retract its approval for food trucks to operate there. — Filepic

IT REMAINS uncertain if the food trucks at the Laman Rimbunan commercial area in Kepong, Kuala Lumpur, can continue their business after Jan 31.

Despite the approaching deadline, Kuala Lumpur City Hall (DBKL) has yet to announce if it will grant another approval to some 40 vendors there.

“I have received word from DBKL that it will involve all stakeholders, but no date has been given yet.

“We will propose to halve the number of food trucks in view of the complaints,” he said, in reference to the concerns raised by business owners in the surrounding shops.

DBKL has come under pressure after many of the shop proprietors urged the local authority to retract its approval for the food trucks.

The business owners claimed that the trucks – which operated daily from 10am to midnight – caused congestion and occupied parking bays in the area.

The food trucks are part of a three-month study starting last November for DBKL to assess the suitability of the site and if any improvements are needed.

The study ends this month.

DBKL Corporate Planning director Zurida Hashim, when contacted by StarMetro about the study, said the authority was finalising its report.

Kepong MP Lim Lip Eng said the trucks should be relocated, in view of the heavy objections from businesses in the area.

“There have also been concerns over cleanliness, because food waste is being discarded at the site.

“I have written to DBKL asking them to discontinue the operation of the food trucks, but have yet to receive any response,” he said.

“We collect a daily fee of RM25 to cover cleaning costs and pay Rela personnel to control the traffic,” he said.

Azlan, in a StarMetro report on Jan 18, argued that rescinding the approval for the food truck operators would exacerbate the congestion and cleanliness issues.

“At least now, their operations can be properly managed as they are under the legal purview of DBKL,” he said. 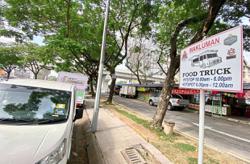