The covered drains that form a protruding kerb along Jalan Development, Kepong.

COVERED drains that form protruding kerbs on both sides of Jalan Development in Kepong, Kuala Lumpur, are causing traffic congestion.

“It is taking up a lot of space and now only one vehicle can pass through.

“There is also a lack of parking spots.

“Vehicles tend to double-park or park haphazardly along the road,” he said.

Yee suggested that Kuala Lumpur City Hall (DBKL) flatten the road kerbs and repaint the parking bay lines as the markings had faded.

He said that a complaint had been lodged with DBKL on Feb 3 last year, but he had not heard back from them yet.

“The kerb in the middle of the road is creating a lot of problems.“People tend to park along the kerb and this has made the road narrower,” he added. 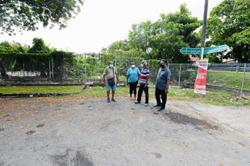