WITH an uncertain future looming, the Performing Arts Centre of Penang’s (penangpac) 10th anniversary celebration was a bittersweet one.

While crowds were back for its special ‘A Decade with penangpac’ production, many were left wondering about its long-term viability.

In a pre-recorded clip, founders Joe Hasham and Datuk Faridah Merican revealed that the 10-year rent-free partnership between penangpac’s parent company The Actors Studio (TAS) and E&O Berhad had come to an end.

The agreement was the main reason the space in Straits Quay had been able to sustain itself. Now, they would have to raise an additional RM1.5mil per year to stay operational.

“It’s a huge blow as penangpac was just getting back on its feet after the last MCO. We suffered terrible losses due to the pandemic and forced closure of arts spaces, and now have to deal with this unfortunate news,” Faridah lamented.

She said raising extra funds would be hugely challenging in the present Covid-19 climate. Their Patron of the Arts fundraising programme, which started last year, has thus far managed to raise only RM180,000 of the RM600,000 initial goal.

The recent anniversary show, hosted by Karam Tabba, reminded the crowd of what they had been missing for the past few months.

A Mridangam segment by Haarishwar Sunmugavel and Krsna Shangkeertana ensued, before stand-up comedian Tommes amused the crowd with ‘A German in Penang’.

Harpist Dr Jessenzzth Chua serenaded those present with ‘Nocturne’, while the Penang Players Music and Drama Society put on a short sketch titled ‘A Couple of Secrets’. The Shuqdancers put on a creative traditional Malay dance, and the TAS Seni Teater Rakyat ended the night with a surprise performance.

Faridah said that despite its many struggles, penangpac’s far-reaching impact as a non-profit organisation to nurture the arts in the state, was undeniable.

“Many have said that Penang before and after penangpac has been entirely different, and vouched that it is THE place to get their dose of culture. They no longer have to travel down to KL for shows.

“International troupes added Penang to their touring itinerary as they now have a proper venue and a support team with local know-how. The numbers and impressive track record do not lie,” she said. Since opening on Nov 11, 2011, there have been almost 1,000 performances and events at penangpac, which drew around 250,000 attendees from all walks of life.

It has also educated almost 1,500 students (from three-year-olds to seniors) in all facets of the arts through classes. Additional outreach activities involved over 50 schools and gave 2,700 students their first exposure to the arts via free workshops.

“If penangpac has to close down, we believe it’d be a big loss to Penang, Penangites and also the northern region.

“It’s not just about people coming to enjoy shows, but the much wider impact that the arts bring to tourism, education and the community at large.

“We have been reaching out to the Penang state government via the Chief Minister’s office as well as PETACE but have not had much luck yet,” Faridah added. 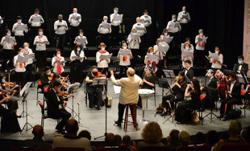