The oldest tortoise in the temple’s pond is believed to be over 100 years old.

LOH Kok Boon has been a caretaker at the Kek Lok Si Temple in Penang since he was seven years old.

And among his normal routine is spending about three hours at the tortoise pond every week.

The 62-year-old would make sure the water in the pond is clean for the more than 500 tortoises roaming there.

“It will usually take me around three hours to clean the pond thoroughly.

“I will change the water and clear the fallen leaves and rubbish in the pond.

“Every day, I will feed the over 500 tortoises here with about 50kg of kangkung (water convolvulus).

“Some of the giant tortoises can grow up to 1m in length,” he said.

To avoid overcrowding at the pond, temple trustee Datuk Seri Steven Ooi said some of the tortoises had been transferred to Guan Yin Gu See Temple in Kuala Kubu Bharu, Selangor.

“The oldest tortoise here is believed to be over 100 years old,” he said.

Previously, the tortoises were placed at the temple’s Liberation Pond before they were moved to the Oriental Garden which has a cascading waterfall that forms part of the pond.

“The area here is bigger and has a more natural setting for the reptiles.

“The pond gets water from the hill, which is cleaner and fresher,” Ooi said. The oldest tortoise in the temple’s pond is believed to be over 100 years old.

Loh using a sieve with extended handle to clear leaves and rubbish from the tortoise pond, sometimes even wading in to clean the pond in Kek Lok Si Temple. – LIM BENG TATT/The Star

The tortoises at the tortoise pond in Kek Lok Si Temple in Penang. 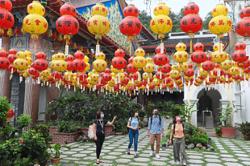