SIXTY-EIGHT officers and personnel of the Penang Fire and Rescue Department received the Excellent Service Award (APC) for last year during a ceremony at The Light Hotel Penang in Seberang Jaya.

Among them was Bertam fire station chief Supiahtul Kamaliah Saad, 40, who is pregnant with her fifth child.

“I got lucky three times. This is my third time getting the award in my 20-year career.

“I dedicate this award to all women officers and personnel in the department.

“I want them to strive harder and perform better in their duty,” she said, adding that the money she received from the award would go to her four children’s education. Jalan Perak Fire Station Chief A’azelan Hassan (middle) together with his personnel after receiving their certificates.

“This is my second time receiving the APC.

“The first time was when I was in the Fire Safety Department a few years ago.

“This award is a good motivation for other personnel to work harder and show their capability while on duty,” said Mohd Razlan, who has served as a fireman since 11 years ago.

Fire investigator V. Sasikala, 35, said she was grateful to have a very supportive husband who understands her line of work as an officer in the Fire and Rescue Department.

Sasikala, who is stationed at the Fire and Rescue Department headquarters in Batu Kawan, expressed her delight in receiving the award for the first time in her career as a firefighter for the past 10 years.

“It was never a difficult decision for me when I was offered to work as a firefighter. “It has been a rewarding experience,” she said.

In the same ceremony, Mohammad Hamdan also presented certificates of 30 years of service with the department to 19 Fire and Rescue Department officers and personnel.

Mohammad Hamdan, in his speech, congratulated the officers and personnel who received the award during the ceremony and urged them to be committed to their duty.

“As firemen, we must show high spirits and practise high work ethics in executing our duty. 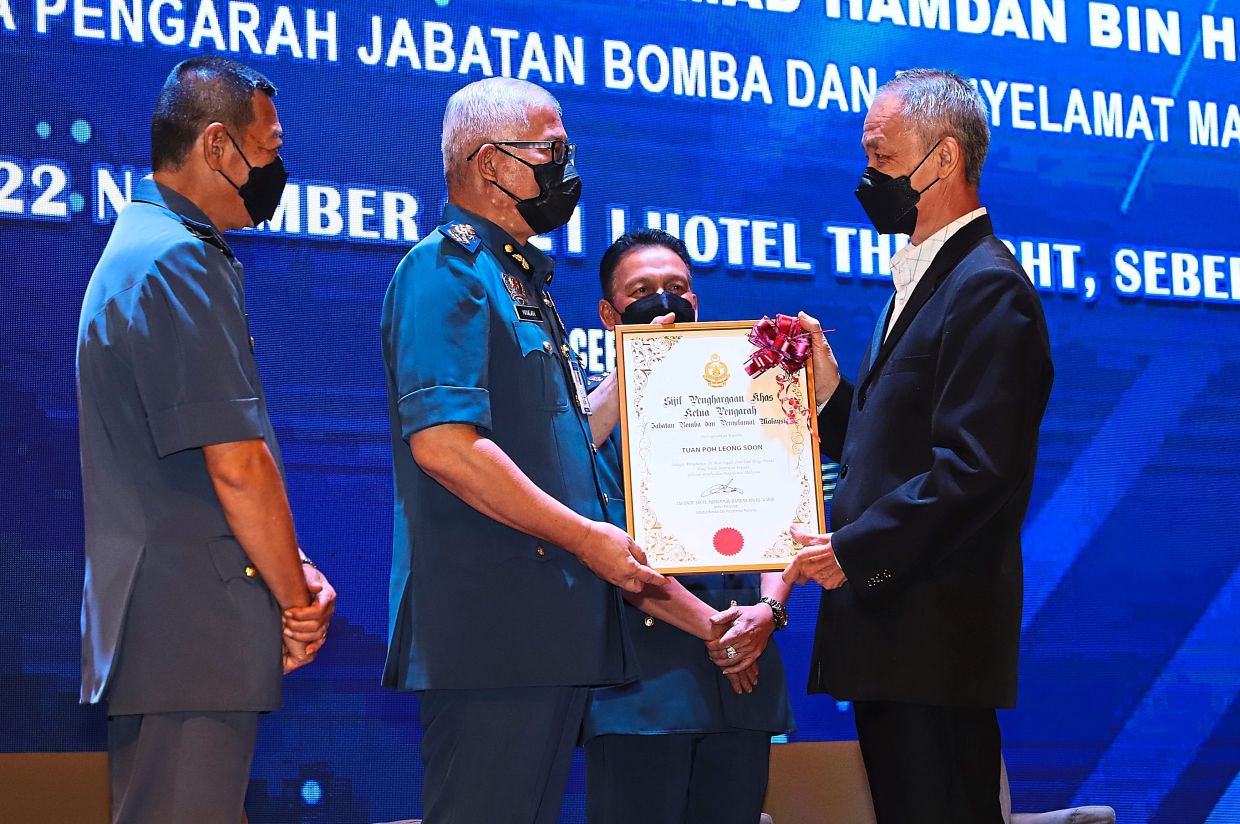 “You cannot escape the trust and responsibilities of tomorrow by evading them today,” he said.

He also took the opportunity to congratulate the department for a job well done while handling their responsibilities during the pandemic.

Earlier, Saadon said he hoped the award presentation ceremony would inspire more than 900 Fire and Rescue Department officers and personnel in the state to work harder and to give the best service to the public.

“I hope this award ceremony will become a catalyst of excellence and motivation to those who serve and make the department one of the high performance departments in the country,” he said.