Federation general-secretary Koh Hock Lye said its adviser Datuk Lim Si Cheng, who is also a UTAR council member, had inspired them to donate to the hospital project.

“UTAR has produced many talented individuals.

“Seeing these individuals contribute to society, we hope communities will continue to benefit from UTAR Hospital and that this act of donation will inspire others to support the hospital as well,” he said, adding that the PPE was part of the 100,000 sets provided by the local government of Anxi County in China.

Koh was speaking during the presentation ceremony at Heritage Hall in the UTAR Kampar campus.

In thanking the federation for the PPE, UTAR president Prof Dr Ewe Hong Tat expressed his gratitude to Lim for coordinating donations for the hospital project.

He said in October, Lim helped to get donations of about RM25,000 from his acquaintances towards the development of the hospital.

He added that the building of UTAR Hospital received positive feedback from the community, making UTAR a university by the people, for the people.

“Next year, we will be celebrating our 20th anniversary, and this achievement has been made possible with the support of the community, which has also led the university to receive many recognitions,” Koh said.

“UTAR gives back to society by providing affordable quality education, and this effort continues through to UTAR Hospital, which will also be a not-for-profit private hospital.

“The hospital will also be a place to train doctors of high calibre, enhance medical and clinical research, and provide affordable and quality basic and specialist medical services to students and the community.”

Prof Ewe said the hospital was still under construction but the Traditional Chinese Medicine building was nearly complete and expected to be launched in February next year.

The fundraising for the hospital is still ongoing, he added.

Guests were given a tour of the hospital site to see the progress of its construction. 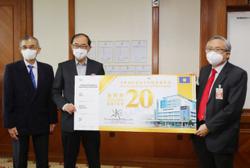