The sinkhole that appeared in Jalan Awan Jawa, Taman Yarl on Nov 12.

BARELY a few hours after a sinkhole in Jalan Awan Jawa in Taman Yarl, Kuala Lumpur had been patched up, two more appeared just 10 metres away.

Residents claim that Indah Water Konsortium Sdn Bhd (IWK) workers had told them that the area, where the latest sinkholes were located, was outside its jurisdiction.

“They told me that the new sinkholes was the responsibility of another utility company,” said Taman Yarl Residents Association member Jagdev Singh.

“I hope someone takes responsibility for these new sinkholes because it is raining every day and anything can happen,” he said, adding that he suspected that the underlying cause could be something more serious and required urgent attention.

When contacted, an IWK spokesperson said that work on the first sinkhole in Jalan Awan Jawa had been completed.

When asked why the sinkholes were occurring, he said, “We suspect it to be linked to underground soil movement.”

Kuala Lumpur City Hall (DBKL) resorted to closing the road temporarily after the sinkhole, which appeared on Nov 12, grew bigger the next day.

Preliminary investigation by DBKL showed that it was caused by a leaking pipe that belonged to IWK. The sinkhole that appeared in Jalan Awan Jawa, Taman Yarl on Nov 12.

One of the new sinkholes that appeared on Jalan Awan Jawa just a few hours after IWK patched up the swallow hole. 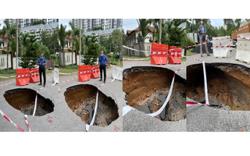