MB: Plans in place for Kulai to be a city

Hasni (second from left) looking at the development plan of the new MPKu building during his working visit to the district.

THE Johor government is planning to upgrade Kulai Municipal Council (MPKu) to a city council.

Johor Mentri Besar Datuk Hasni Mohammad said the state government would look into the matter once public amenities and public service to ratepayers in Kulai had improved.

“We do not want to give Kulai city status if public amenities are not on par with other cities and problems such as waste collection, clogged drainage and potholes are not resolved.

“We must first look into these issues before deciding on the matter,” he said in a statement.

He added that Kulai was one of the key areas that the state government would like to develop because of the many industrial sites there.

“Kulai will not be left out in our development plans and I have recently spoken with the local leaders on how we can balance between the safety of local residents and the influx of foreign workers caused by recent investments, especially in Senai.

“We are deeply concerned about the social impact of having too many foreign workers here,” he said, adding that it was the state government’s duty to protect its people and not only focus on investment.

He also stated that the state government would devise a strategy to ensure the safety of local residents while making sure that the economic spillover would continue to flow into Kulai.

Kulai is eighth districts that Hasni had visited during his official working trip.

Some of the locations that Hasni visited were the new MPKu complex in Persiaran Indahpura which is expected to be in operation next year. 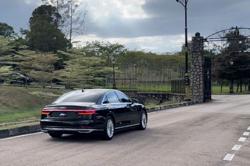