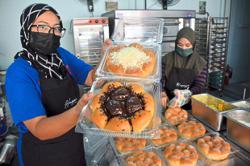 Zuraidi (left) and Chan with Muniamah before she agreed to go to an old folk’s home.

THE Semambu PKR service centre in Kuantan, Pahang, is trying to reunite a homeless elderly woman with her family.

The woman, who identified herself only as Muniamah, said she had been sleeping in the corridors of a block of flats in Jalan Haji Ahmad even before the movement control order started last year.

“I was staying with my nephew here but he was evicted due to unpaid utility bills. He never came back and I have been sleeping in the corridors since,” she said.

Muniamah, who is believed to be in her 60s, said she had lost her MyKad.

Residents have been helping out by giving her food and letting her use the bathroom.

Muniamah also said she had seven children but did not know how to contact them.

Semambu PKR coordinator Chan Chun Kuang said he was contacted by the flat management in May as they feared Muniamah might contract Covid-19 from wandering around.

“We met with Muniamah back in May and offered to take her to an old folk’s home but she did not want to go then.

“We managed to track down Muniamah’s nephew in June.

“He told us that Muniamah’s daughter in Kuala Lumpur would come pick her up after the movement control order ends but this has not happened.

“Muniamah’s nephew refused to give us the daughter’s contact details and we haven’t been able to get in touch with him since,” said Chan.

He added that Muniamah finally agreed to go to an old folk’s home and Pusat Jagaan Orang Tua VJ has agreed to take her in at no cost.

“With a MyKad, we can get her help from the Social Welfare Department and also check her vaccination status.

“We will also try to locate Muniamah’s family members and hope we can reunite them,” said Zuraidi.