BORN and raised in Teluk Bahang, Penang, retiree Toh Siew Hong found her first plogging event to clean the beach near her house to be very meaningful.

The 52-year-old, who would usually be marketing or at home in the morning, said she was glad she took part in the event.

“I never knew plogging (jogging and picking up litter) could help us clean our surroundings.

“I certainly never thought this much trash could come from a single stretch of beach,” she exclaimed.

Toh, who joined the event on Saturday morning after a friend invited her, said she felt proud after helping to clean up the beach. Volunteers showing the cigarette butts they found on the beach.

“We picked up so many plastic bottles left behind by beach visitors.

“I cannot imagine that so many people would just leave their trash behind.

“While doing this work, all the walking and jogging is great exercise as well, especially as I have been cooped up at home for months,” she said when met at the Teluk Bahang beach.

During the event, some 130 participants picked up trash weighing a total 336kg including a 14kg tyre.

About 160kg of the trash was non-recyclable items while the rest could be recycled. 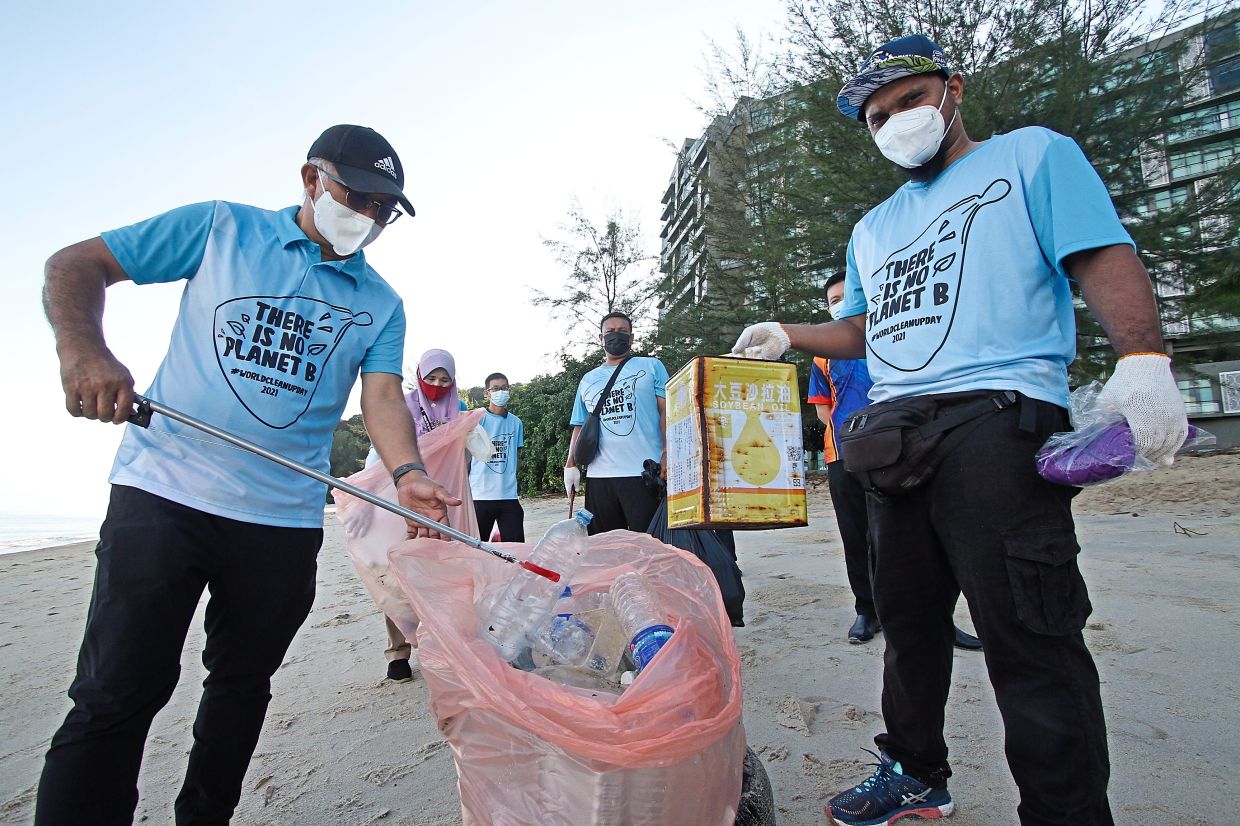 Among the items picked up were fishing nets, plastic bottles, plastic bags and drinking straws.

The event was organised by the Balik Pulau constituency member of parliament’s office with the support of Penang Island City Council, the southwest district police team, Fire and Rescue Department and Angsana Hotel.

The event held in conjunction with World Cleanup Day aimed to get people to help clear the beach of trash.

World Cleanup Day is held annually on the third Saturday of September. This year, it fell on Sept 18. It was first held in 2018 and started by an environmental group in Estonia called ‘Let’s Do It! World’.

The aim is to ultimately involve 380 million people in the world to join hands to clean up trash.

To date, the movement has brought 60 million volunteers in 191 countries together. A reported 330,000 tonnes of trash have been collected by these volunteers to date.

“But this is only a short-term solution. A volunteer pulling away a fishnet.

“For a long-term solution, we have to educate people to become more civic-conscious.

“Caring for our environment should be a long-term practice,” he said.

Yeoh added that tourists and locals alike should take good care of the places they visit.