Residents in Taman Supreme, Cheras, are concerned that a proposed development on a slope near a housing scheme will pose a safety risk.

They said the projects would cause a surge in traffic volume due to increased population when an additional 2,500 units were built.

Representatives from Taman Supreme, Taman Desa Aman and Taman Segar gathered in Taman Supreme to voice their objection against further development in the area.

Cheras MP Tan Kok Wai, who highlighted the residents’ concerns, said he would raise the matter during a meeting with Kuala Lumpur City Hall (DBKL) tomorrow.

“We want DBKL to either stop the projects or scale them down to a level that is agreeable to the residents.

“We also want to know what measures will be taken to minimise the impact of these projects on local residents,” he said.

He said the residents currently had limited green areas for recreational and leisure activities.

“The developments will bring in more traffic and cause more noise and carbon emission,” he said.

Resident Tan Boon Charn, who coordinated the effort by the associations, raised concerns about a proposed development on a slope near Taman Supreme.

She said the granite slope would have to be blasted before any construction could start.

“Such activities can damage the houses here, not to mention it may also cause soil erosion and landslides,” she added.

Boon Charn said the residents objected to the project in 2016 and were told by DBKL in 2018 that only low-rise developments would be allowed.

“But we recently found out that a new project has been approved,” she said, noting that this could affect some 600 existing houses.

She said the associations had sent their objections again to DBKL on April 21 and June 10. 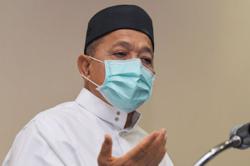