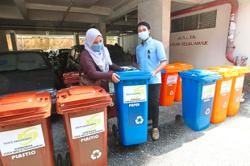 A RECYCLING and e-waste collection programme will kick off at Damansara Bistari Flats to get residents of the low-cost flats to practise recycling and responsible waste disposal.

Bukit Gasing assemblyman Rajiv Rishyakaran said the programme jointly organised by his office and that of Petaling Jaya city councillor for Zone 9 Loyis Uding, would have two models.

“One is for residents to dispose of their recyclable waste in dedicated recycling bins placed at their respective block’s refuse chamber or at another location determined by the block representatives.

“These recycling bins are sponsored by KDEB Waste Management, which will handle the management and disposal of both waste at the refuse chambers — meant for recycling and for the landfill.”

The second model will have a dedicated lorry coming on the second and fourth Saturdays of the month, from 10am to noon, to collect recyclable materials and e-waste.

“This method offers an incentive for the low-cost residents, as they will be paid for dropping off their recyclables and e-waste,” said Rajiv, adding that payment would be based on the market rate.

“The collection point will be at the open area near Block D (opposite Lek Seng Kopitiam).”

He added that residents from neighbouring areas were also welcome to drop off recyclables and e-waste under the second option, which would start on Oct 30.

“We are offering two methods to give the low-cost flat residents options on how they want to dispose of their recyclable waste.

“They can do it daily or wait for the twice-monthly collection. At this point, we are unsure which model will be more popular,” said Rajiv.

On how the programme would be publicised, Loyis said posters would be distributed to each flat household and placed in the common areas.

“We have informed the block representatives and they are keen to start,” he added.

Block B representative Rosita Md Nor, 39, said the programme would encourage residents to separate waste at source and inculcate recycling as a regular habit.

“Some residents already do it on their own and send their recyclables to other places.

Having the bins and lorry collection here offers greater convenience,” said the flat resident of 15 years.

“Many are excited about participating, since they will be paid for their unwanted items,” she said.

Rosita added that the programme would also help address hygiene concerns as some residents would leave their recyclable items along the flats corridors.

For details on the programme, visit www.facebook.com/rajiv4malaysia or email help@bukitgasing.my