One of the upgraded tennis courts at Sony Sports Complex.

TENNIS enthusiasts and the community living near the Sony Sports and Recreation Complex in Seberang Jaya, Penang, can look forward to games on two upgraded tennis courts there.

State youth and sports committee chairman Soon Lip Chee said the upgrading was completed on Sept 23, three weeks ahead of the scheduled completion date on Oct 17.

“The project cost RM100,000 and the work included repairs and paving of the court surface,” he said in a statement.

The tender for the project was advertised on April 16 this year and upgrading began on Aug 23.

“Payment or registration as a club member must be done first before one is allowed to use the tennis courts,” said Ong.

Soon said the state government valued the sports facilities in Penang and would always study matters related to these facilities with the Penang Stadium and Open Area Corporation (PSDKLPP). 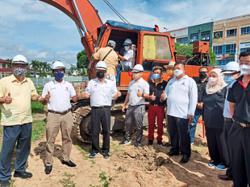