Sobey (centre) and Tan handing over the petition comprising compiled signatures to Etty Zurina at MPK in Klang.

OVER 600 people have signed the Save Berkeley Field petition against Klang Municipal Council’s (MPK) controversial plan to turn a 0.95ha recreational field in Taman Berkeley into an open-air carpark and a futsal court.

“Our committee members, who are residents, volunteered their time to go house to house.

“The campaign originally set a goal of 500 signatures but surpassed that number last Friday with 623,” she said.

She added that residents in Taman Berkeley had voiced their objections against the project as it would deprive them of a green space to exercise in.

Sobey and committee member Alex Tan handed the signatures and a memorandum against the project to MPK Corporate Communications Department officer Etty Zurina Mohd Nor on Monday.

“Our discussions with the residents found that people wanted MPK to withdraw the project and save the open green space where they enjoyed going for brisk walks, jogging and doing tai chi, among other exercises,” said Sobey.

She said the proposed project contradicted MPK’s Low-Carbon City Action Plan 2027, which called for control on Klang’s development to achieve a healthy environment suitable for outdoor activities and that of a green community.

StarMetro reported in August that residents learned of the project through a notice on July 20, which was an online questionnaire that gave a brief description of the proposed 85m x 59m carpark and 30m x 20m futsal court.

Established in 1971, Taman Berkeley is one of the earliest, well-planned housing estates in Klang. It now has 974 houses, 143 shoplots, an old cinema repurposed as a food court and a community hall that borders the field.

“Ahmad Fadzli explained that the proposed open-air carpark and futsal court were not MPK’s idea but was a proposal from Taman Berkeley Residents Association,” he said.

Nallan added that Ahmad Fadzli said he would peruse the memorandum submitted by the Save Berkeley Field Pro-tem Committee but asserted that any development on a gazetted area would be brought to Selangor Economic Action Council for approval. 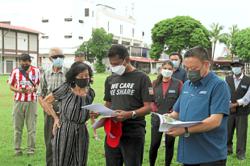