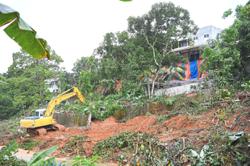 PROPERTY owners must make it a point to inspect their surroundings frequently to identify early signs of slope failure.

She said it was vital that owners know what to look out for so remedial works could be carried out immediately to prevent major damage later.

“Even if there had been no significant incidents in the neighbourhood, owners should still check as changes in the surrounding environment such as development projects can affect a slope,” she added.

Motoyama noted that while residents were more aware of the risks of new hillslope projects, similar consideration should be given to older neighbourhoods and properties.

“In Kemensah Heights, Ampang for example, there had not been any landslide in the past until Friday’s incident,” she said, adding that other signs to look out for included separation or gaps at the boundary walls and bulging walls or slopes.

About 27 families were evacuated following the Sept 17 landslide.

“The houses and structures in the affected area were built in 1982,” he explained.

“At the moment, we are monitoring the three affected lots.”

He pointed out that MPAJ monitored 356 risky slopes every year for early signs of slope failure.

Of these, 118 belong to MPAJ, 37 to the government while 201 are owned by private individuals, developers or joint management bodies and management corporations.

However, Zafrul added that slopes in Kemensah Heights were not under its inventory as it was not considered a critical risk area for slope failure.

Kemensah Resident Committee chairperson Mohd Fazil Abdullah said hillslope areas such as the one in Kemensah Heights should be monitored from now on.

“We hope the authorities will conduct soil studies or utilise other monitoring systems to detect any early signs of slope failure,” he said.

Deputy Science, Technology and Innovation Minister Datuk Ahmad Amzad Hashim said yesterday that satellite images taken before and after the landslide would be compared to help determine the cause of the landslide in Kemensah Heights.