A TOTAL of 605 complaints on human-elephant conflicts have been received by Johor Wildlife and National Parks Department (Perhilitan) from six districts in the state since 2015.

“Johor Perhilitan has identified five groups of elephants throughout the state. A majority of the human-elephant conflicts involve a group of elephants from Panti (Kota Tinggi) where there are between 30 and 40 elephants.

“Factors contributing to these conflicts include fragmentation of the forest, which is cut off by roads and plantations, making it difficult for the elephants to move around,” he explained.

He said this in his winding-up speech during the Johor state assembly sitting at Bangunan Sultan Ismail in Kota Iskandar earlier this month.

Other districts that have also recorded such clashes during the same period are Mersing with 187 cases, Kluang (160), Segamat (48), Johor Baru (six) and Batu Pahat (one).

Vidyananthan said initiatives were taken by Johor Perhilitan to manage the issue and these include fitting satellite collars on the elephants to get more information on their movement patterns.

“Four collars have been fitted on a group of elephants since 2019 and are being monitored by state Perhilitan.

“The collars also function as an early warning system to detect the movement of the elephants so that proactive measures can be taken when they get closer to a village or plantation area.

“Based on analysis, the department has also identified corridors that have become the main route of the elephants.

“They are at Felda Lok Heng Timur, Felda Lok Heng Barat, Felda Easter and Felda Pasak,” he said, adding that the department was also making efforts to work with plantation owners who were affected by the elephants.

Vidyananthan added that Johor Perhilitan had carried out 716 monitoring activities between 2015 and 2021 to control human-elephant conflicts in affected areas.

“A total of 24 operations to capture elephants involved in the conflicts were carried out whereby 20 elephants were relocated to a new habitat.”

He said the department spent RM1.2mil on the relocation.

He added that the establishment of Johor Elephants Sanctuary (JES) in Kota Tinggi was helping to improve the management of elephants in the state and reduce clashes between the jumbos and humans, especially in agricultural and residential areas.

“The state Perhilitan is also attempting to improve the habitat of the elephants in the JES; however, their efforts are currently affected by the land in the area, which was previously a mining site,” he said. 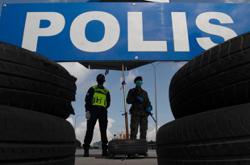