A NUMBER of residents in Subang Indah, PJS 10 in Petaling Jaya, want the authorities to stop clearing trees that have been growing by the riverside at Jalan PJS 10/10.

They claim that in recent weeks, Drainage and Irrigation Department (DID) had cleared over 20 mature fruit and palm trees alongside the river here.

A resident, who only wants to be known as Kamal, said some of the trees were already there from the time the housing development was launched, almost 30 years ago.

“We found out that a resident had complained to DID to remove several dead trees from this land.

“It’s shocking that the majority of healthy trees were also felled.

“This small land by the river attracts wildlife such as birds and squirrels.

“We often see kingfishers and storks, so we are concerned that they will no longer be around as the land is now barren,” said Kamal.

Smaller parcels of land such as those by riverbanks must also be allowed to have trees, he stressed.

The land was previously used as a landscaping nursery but the business owner died last year.

Since then, the residents have been keeping an eye on the trees and plants there.

“We hope the land will be replanted with trees instead of being left barren.

“This is important because it is a riverbank and we don’t want soil erosion to happen.

“We also hope this land will not be fenced up by residents and treated like private land. Since it is a riverbank, it has to be left as a green belt,” added Kamal.

Area councillor Ridzuan Ahmad said the land was owned by DID, so the department had the right to clear the site.

“The public must understand that the riverbank is not their space to plant trees without DID’s permission.

“Some of the trees are old and there have been complaints that they may fall on rooftops and cause damage to property.

“Residents can call for a proper discussion with DID and make a formal request to use the land for gardening.

However, no one should trespass on the land and use it for their own purpose without permission,” he said.

Ridzuan added that his understanding on the matter was that the land would be cleared and proper landscaping done.

DID Selangor responded in an email to StarMetro that the clearing of the land took place due to a public complaint over its maintenance.

It said clearing work began on Aug 23 and was estimated to end on Oct 18.

It is also part of the Sungai Penaga maintenance work, which is necessary, so that the land could be better supervised by the authorities, it stated.

“In case floods, illegal dumping or pollution were to take place, the authorities would be better able to access this land.

“The dead trees could pose a danger to nearby residents and we also want to prevent the dead trees from falling into the river and causing a blockage.

“We have informed the residents leaders here of our scheduled riverbank maintenance works and will continue to upkeep this land,” stated the spokesperson from DID Selangor. 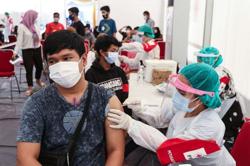