One of the drop-off points for the KitaRecycle programme located at Sunway Citrine Hub in Iskandar Puteri.

“We also engaged with the public and distributed notices about the SAS programme to 27,405 premises in Johor during the same period,” he told StarMetro.He added that although no compounds were issued by the agency, SWCorp would continue to beef up its recycling awareness campaign to ensure the SAS programme continued to get support from the people.

Cairul revealed that there had been no significant increase in the amount of food waste brought to the landfill.

“Even though there are new roadside hawkers now, we have not recorded major changes in waste collection.

“We would like to remind the public to only prepare or buy food according to their needs, to avoid wastage.”

He said the “Value Food, No Waste” campaign was an ongoing initiative by SWCorp and not carried out only during festive seasons.

“Aside from our SAS engagement, we have also advised hawkers and petty traders to not prepare overly large amount of their dishes. This is to avoid leftovers being thrown into the bin,” he added.

“Glass bottles that have no commercial value for recycling always end up in landfills, so we decided to take up this challenge and create a platform for industry players to recycle bottles,” he said.

Mohd Norlisam said SWM Environment was planning to expand its KitaRecycle app to other agencies and organisations as a medium for recycling contests.

“This app has been proven useful in the Iskandar Malaysia Ecolife Challenge (IMELC) competition, which was introduced to primary schools in 2013.

“Every KitaRecycle app user will first need to separate recyclable waste into a different waste bag and mark it with a QR code. 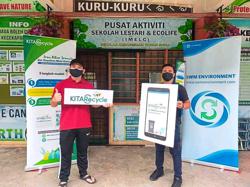