Fish and prawn fries being released into the now improved Sungai Ulu Benut.

THIRTY thousand fish and prawn fries in total have been released into Sungai Ulu Benut in Simpang Renggam in a step towards turning one of Johor’s most polluted rivers into an environment for recreational use.

Simpang Renggam MP Dr Maszlee Malik said an application for the aquatic fry was submitted to the Fisheries Department earlier this year as part of a plan to improve the river’s condition.

“On July 13, the department, with the cooperation of the Kampung Paya Palembang residents committee, finally released 20,000 ikan baung (river catfish) and 10,000 udang galah (freshwater prawn) fries into the river.

“This is good news for Simpang Renggam folk, whose lives have previously been affected by the river pollution for years, including disrupted water supply,” he said.

He explained that the river had been contaminated by ammonia pollution from the CEP Renggam landfill back in 2019.

The landfill had since been shut down.

The closure of the landfill, which was the source of the people’s water woes, brought the matter to an end.

There were no more reports of ammonia pollution in the area.

“Village chief Naib Isa and the residents committee then held discussions with me to turn the river into a recreational destination for local community activities such as picnics and fishing, as well as photo and video shoots,” said Maszlee.

“The idea was met with scepticism from the public at the time.

“But with the effort of the residents who were committed, the plan started moving forward.

“The Drainage and Irrigation Department as well as other relevant agencies began digging, widening and beautifying the river,” he said.

He added that villagers hoped to organise a small-scale fishing competition in the next five months while adhering to the standard operating procedures, if the Covid-19 situation improved.

Maszlee said their ultimate aim was to transform Sungai Ulu Benut into a tourism attraction. 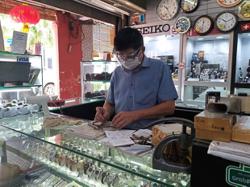