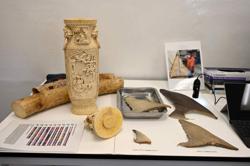 A worker taking care of abandoned dogs at Hope in Pekan Nanas.

ANIMAL shelters are witnessing an increase in the number of cats and dogs abandoned by their owners since the start of the movement control order on March 18 last year.

Homeless and Orphan Pets Exist (Hope) development team leader Francis Gan said the increase was about 30% and was on an upward trend.

“We have been getting many calls from owners who can no longer take care of their pets, as well as from the public on stray cats and dogs,’’ she said.

Among the reasons owners abandoned their pets during the MCO, she said, were loss of income, stress and finding the animal a burden.

Gan said the shelter had to turn away requests as it could no longer take in more abandoned felines and canines due to their own limitations.

She said the 1.94ha shelter located in Pekan Nanas, Pontian, about 35km from Johor Baru city centre, currently housed about 200 cats and 3,000 dogs that were either abandoned or abused.

“We are a non-profit organisation and do not get any financial assistance from the government to run the place.

“We rely on donations from the public,” she added.

Gan said Hope needed about RM170,000 a month to operate, and this included paying salaries to its 20 workers.

She encouraged people to adopt the animals, but also noted that those from Johor Baru district could not visit the shelter as there was a roadblock in Pekan Nanas.

“The number is likely to go up in coming months as many have lost their jobs and can no longer afford to take care of their pets.”

There are also cases of cats and dogs being abandoned at home with no one to take of them because their owners are working in Singapore.

These pets, Chia said, were being cared for by family members or neighbours, or had been placed in pet hotels as their owners did not expect the border with Singapore to remain closed since the first MCO.

“On average, we receive about four calls a week from pet owners or caretakers to take in the pets.”

Chia said the number of dogs at the shelter was limited to 300 at any one time, and it could not take in more animals as it depended on public donations to run the place.

Cares runs its animal shelter in Lima Kedai, a town between Gelang Patah and Skudai, with monthly expenses costing about RM15,000.

It also has a transit centre at Villa Nabila.