A volunteer packing the donated essential items into a goodie bag at Dewan MPKK Balik Pulau.

WHILE Balik Pulau MP Muhammad Bakhtiar Wan Chik was preparing to distribute food baskets using his RM300,000 parliamentary allocation, a group came forward to give 350 food baskets to the people of Balik Pulau.

Muhammad Bakhtiar said the food baskets worth RM100 each were given by a pastor and his friends who had raised the funds.

“They were distributed to 350 households in Bayan Lepas, Teluk Bahang and Pulau Betong by Village Community Management Council (MPKK) members.

“The list of people getting the aid was given by MPKK members and once all the food baskets under the government programme arrive, we will be distributing them to others in the three constituencies,” he added.

Pastor Yeoh Yong Chong and his friends Sister Evon Ooi and Datin Karen Ng were the three individuals instrumental in raising funds for the food baskets.

“We were disturbed by a recent suicide case caused by the pandemic and gathered to raise funds for the poor,” said Yeoh.

“Many responded to our call and we have raised RM51,000 so far which was used for the distribution in Balik Pulau,” he said.

Yeoh added there would be another round of food basket distribution to 300 families in Jelutong soon. 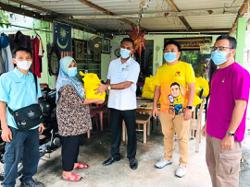