Shoplots at Station 18 in Jalan Pengkalan Barat, Ipoh, have been lying empty for a long time. — Photos: RONNIE CHIN / The Star

Empty and unkempt houses and shoplots are a common sight at several areas in Ipoh, Perak.

Residents say this has been an ongoing problem for years.

While some of these buildings were abandoned, others had been put up for sale but there were no buyers.

In addition to being an eyesore, these vacant buildings have brought about a host of other problems.

One affected area is Sungai Rokam where about 10 houses on Jalan Mawar, Jalan Perah, Jalan Rokam and Jalan Salak have been abandoned.

A teacher, who wished to be known only as Amy, said one of her neighbours had moved out and left his house empty for several years.

“When the compound became overgrown with trees and shrubs, my family and I became worried about rodents, reptiles and other animals.

“We tried to call the owner to clear the area but we could not reach him.

“He never came to check the house nor did he ensure the surroundings were maintained,” she added.

Amy said her mother had once seen a snake in their compound, which she believed had come from her neighbour’s house.

”We called the Fire and Rescue Department and they caught the reptile.

“My brother and father have put up special blinds at each window to prevent any creepy crawlies from entering.

“We had to do away with our small garden too as we feared it had become a habitat for snakes,” she said.

Amy said a new tenant moved into the house last year and found that it was infested with rats.

“It took them a long time to clean the house and make it habitable,” she added.

Another Sungai Rokam resident, Nurhanida Yang Razali, said there were at least three abandoned houses near her home at Jalan Mawar.

“I have been staying here for 40 years and we have had several bad experiences due to these abandoned houses.

“There have been times when snakes slithered into my compound,” she said.

“The homeowner hired a contractor to clean up the premises some time ago but it has been quite a while since it was maintained properly.

“I have contacted the Ipoh City Council about the problem,” she added.

Nurhanida noted some owners had passed away, and the houses were left empty ever since.

“I know one of the owners and his children are working in another state.

“The house has been put up for sale, but I don’t think there are any interested buyers,” she said.

Another house near her home used to have a tenant but they only stayed for a short time and the property is empty again, said Nurhanida.

In Klebang Putra, resident Maryanti Misrawi said she was concerned about the vandalism taking place at empty shoplots located about 200m from her house.

“I think only two of the shops are open for business and the rest have been left empty.

“I even saw some burnt furniture there while the walls are covered with graffiti.

“I am worried for my safety as well as that of my neighbours,” said the 29-year-old, adding she hopes the city council would clean up the area.

Another resident, Muhammad Al-Hafiz Mohd Nur Helmi Chai, 26, believes the shoplots have been vacant for years.

“Some of these lots were used by drug addicts, vandalised and are strewn with rubbish.

“It’s been like that for years, probably because there is not much traffic here,” he said.

Muhamamd Al-Hafiz suggests that the city council resurface the road from Klebang Putra-Chepor Impian to Meru.

“That way, more cars will use the road and maybe that will encourage more businesses to set up shop here.”

He said although there was a “rat lane” from Klebang Putra-Chepor Impian to Meru, it was filled with potholes.

“If there is a proper road to connect these two areas, things may change for the better.

“When that happens, I hope there will be barbers, electrical shops and more here,” he added.

When contacted, a city council spokesman said compound notices would be issued to owners who failed to maintain their premises.

“The public may contact our hotline to report unkempt premises, the city council will work together with the land office to track down the owners.

“We will give the owners between 14 and 21 days to clean up their premises.

“If they fail to do so, our appointed contractor will clean it and send the bill to the owner,” said the spokesman, adding that this is provided for under Section 82 of the Local Government Act 1976 (Act 171).

“The owners, however, need to renovate these properties before putting them up for sale.

“A refurbished house will be more attractive and there is also no need for buyers to get another loan to renovate the premises.

“Sadly, many of these private properties have been left idle and are now overgrown with weeds,” he added.

As for vacant shoplots, Khoo, who is former Perak Rehda chairman, said these could ideally be converted into accommodation for workers.

“There are many vacant shoplots in Station 18. These can be turned into workers’ quarters or hostels.

“The downside though, is that the utility charges, quit rent and assessment, will be higher,” he said.

He called on the city council and Tenaga Nasional Bhd to look into this and come up with a workable solution.

On the reason for empty shoplots in certain areas, Khoo attributed it to market saturation.

“In some areas, hundreds of shoplots were built.

“Some had to foreclose due to financial problems.

“I believe that a proper survey should be done before any new development is approved in an area,” he added. 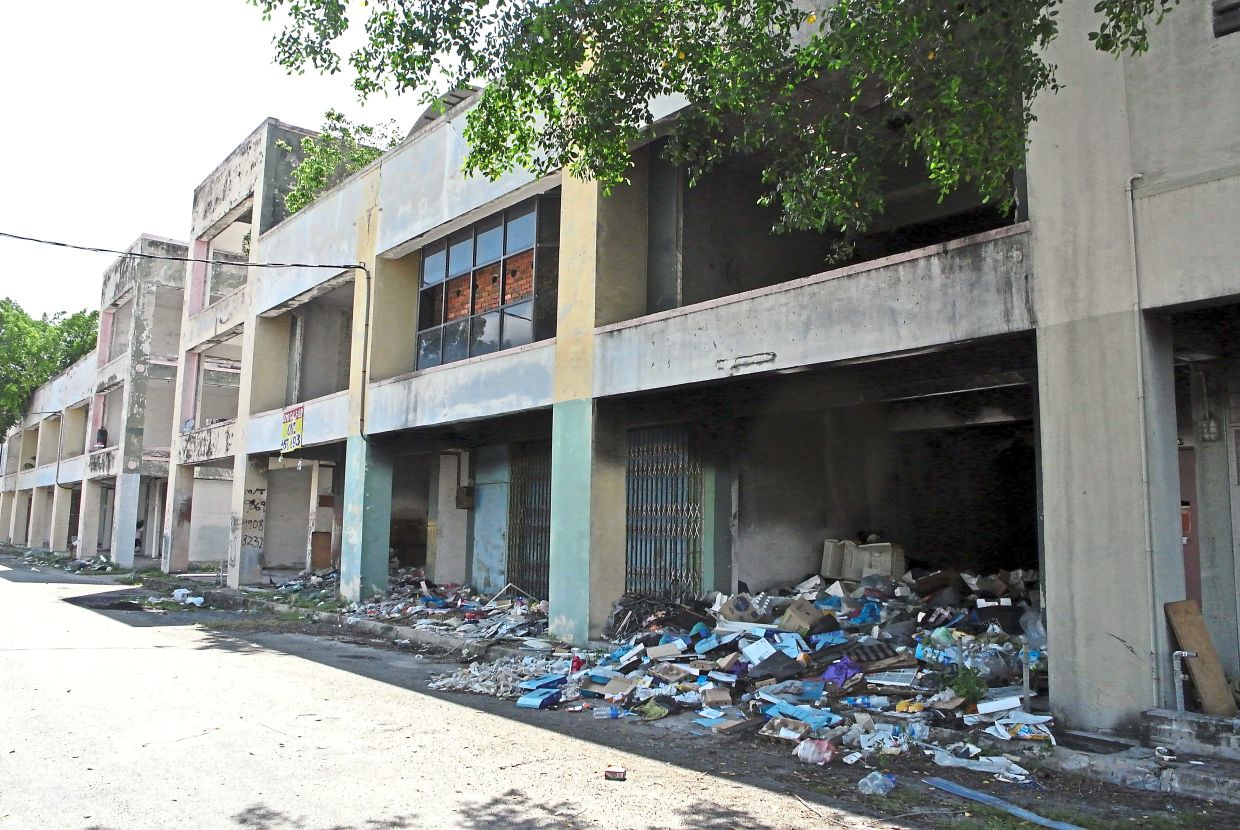 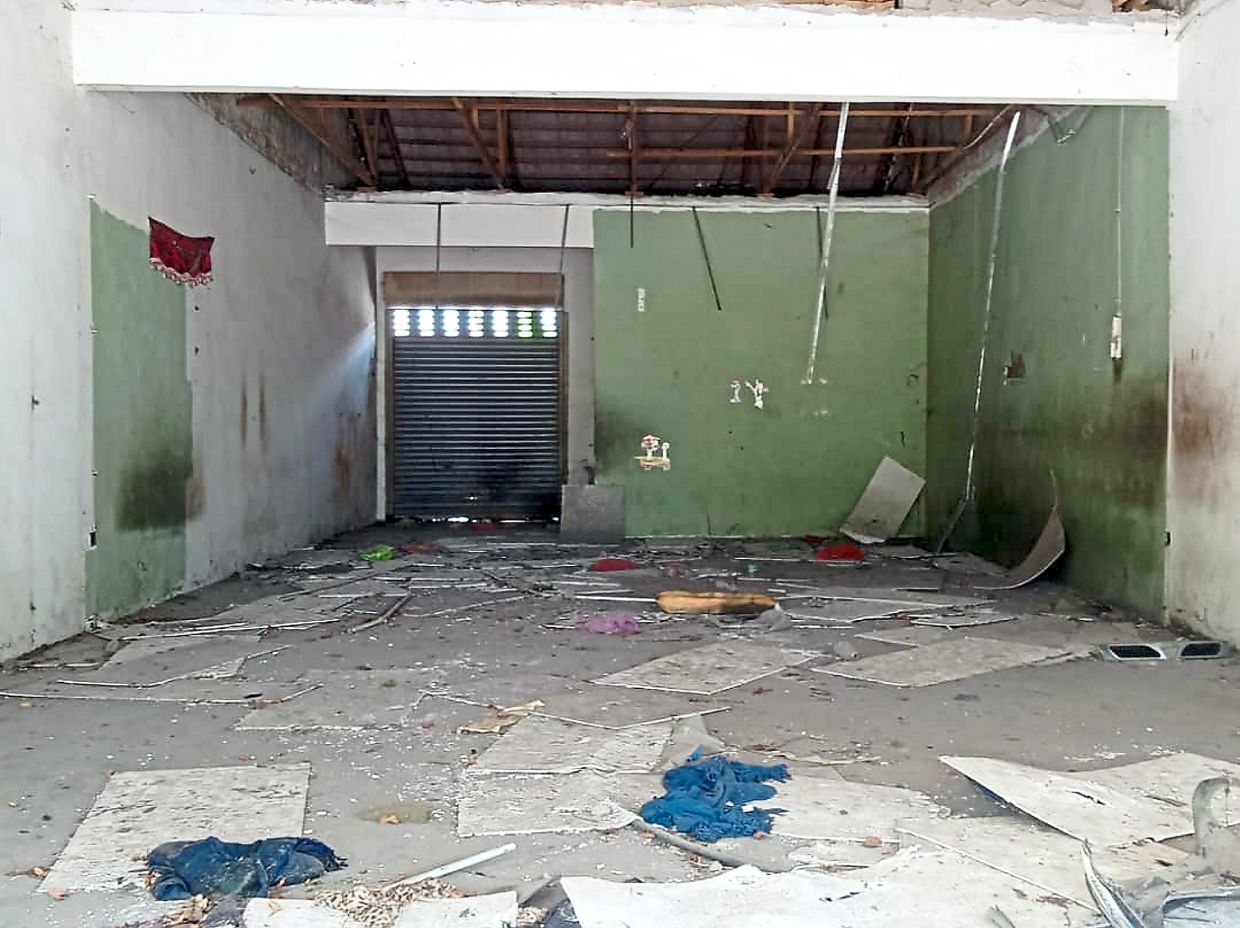 Shoplots at Station 18 in Jalan Pengkalan Barat, Ipoh, have been lying empty for a long time. — Photos: RONNIE CHIN / The Star

Muhammad Al-Hafiz says the main road should be resurfaced to bring motorists to Klebang Putra.

A house at Jalan Salak, Kampung Sungai Rokam in a derelict state.

Rubbish seen at Medan Station 18 in Ipoh. This is a common problem at dilapidated buildings.

Maryanti worries about her safety and hopes the area around Klebang Putra will be cleaned up.

An empty shoplot at Klebang Putra, Ipoh, which looks like it has not been used for years.

The interior of an abandoned shoplot in Klebang Putra, vandalised and strewn with rubbish.