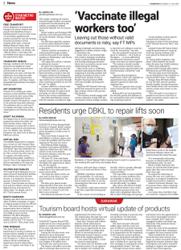 Residents of Desa Rejang Public Housing have to wait in a queue for a few working lifts each time one breaks down.

RESIDENTS of Desa Rejang Public Housing in Setapak, Kuala Lumpur are at their wits’ end over the frequent breakdown of lifts at the 12 blocks there.

They want Kuala Lumpur City Hall (DBKL) to initiate repairs soon to solve the problem that has been ongoing for the past two years.

“On June 10, I met with Kuala Lumpur mayor Datuk Seri Mahadi Che Ngah who approved an allocation for the repairs.

“It is possible that the repairs stalled due to the enhanced movement control order.

“We hope the repair works can start soon as this issue is a great inconvenience to residents,” he said. Mohd Noor wrote to the Federal Territories Ministry about the dysfunctional lifts early this year.

The flats were placed under enhanced MCO from June 18 to July 1 after 264 residents tested positive for Covid-19. A total of 3,512 reisdents were screened.

Each block has between 16 and 19 floors, with each floor comprising 12 to 16 units and three or four lifts.

DRPHRA committee member Affa Syaripuddin, 35, said many lifts were out of order and residents had to jostle each other to use the remaining few that were in working condition.

He said this could cause someone to get hurt, especially during peak hours.

“It also causes overcrowding in the lifts, which is unsafe, although we just came out from the enhanced MCO.

“We urge DBKL to step in quickly as there are many residents who are disabled or elderly, as well as parents with small children who use the lifts daily,” he added.

Affa, who is also Block H leader, said all block leaders were under tremendous pressure from residents who complained about the lifts in their WhatsApp chat groups.

“It is emotionally exhausting because we (block leaders) also hold full-time jobs,” he said.

Block E leader Md Nasar Md Yunus, 49, said the lifts broke down again after they were serviced three years ago.

He urged the authorities to ensure the new cars could last a long time, as frequent breakdowns would inconvenience residents.

As at press time, StarMetro had not received a response from DBKL.