The Malaysian Hairdressing Association is calling upon the government to allow them to reopen their businesses as closure has left them with a heavy financial burden.

OWNERS of hair salons and barber shops are in dire straits and want the government to allow them to reopen for business instead of having to wait until the second phase of the National Recovery Plan (NRP).

“It is just frustrating to be paying for a premises but not being able to be open for business at all, ” he said.

He referred to the government’s threshold pointers before the nation was allowed to transition to Phase 2 of the NRP — average daily Covid-19 cases dropping below 4, 000, intensive care unit usage no longer at a critical level and 10% of the country’s population having received two doses of the vaccine.

“Our salons and barber outlets are not allowed to operate until the second phase but this is indefinite.

“Most of us are stressed out as we are left in the lurch and not able to earn an income in the meantime.

“It is an unstated length of time before the country transitions to Phase 2, ” he said during an online press conference titled “Survival of Hairdressing Industry”.

“They have been unable to pay several months of rental or retain their workers.

“Our members are perplexed about how to keep their businesses going if they are not allowed to operate.

“We urge the government to allow us to operate with strict standard operating procedure in place, ” he said.

MHA and UAHA honorary president and adviser Datin Winnie Loo said their 74, 500 members (that included barbers throughout the country) were unanimous in wanting the government to allow them to reopen their businesses.

“We have applied to the International Trade and Industry Ministry (Miti) and the Domestic Trade and Consumer Affairs Ministry (KPDNHEP) on June 11 and June 18 to obtain permission to resume business.

“We are still waiting for an answer, ” she said.

It was disheartening knowing that hairdressing businesses were placed under Phase 2 and not Phase 1, she added.

Magendran observed that since the Covid-19 pandemic began, restrictions on barbers had seen on-again, off-again shutdowns, which had impacted most of the families in the trade.

He said that from March 2020 until now, hair salons and barber shops had closed for an accumulated five months or more. 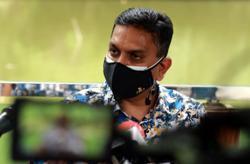