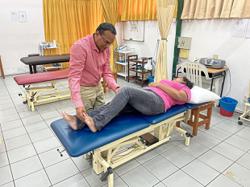 Kong (left) showing the approval letter from the Welfare Department for aid to be extended to Santhanaletchumi (centre) at her home in Taman Bernam Permai, Tanjung Malim. With them are her children and Rau.

HOUSEWIFE M. Santhanaletchumi was abandoned by her husband when she was four months pregnant with their child last year.

The 29-year-old from Taman Bernam Permai in Tanjung Malim was forced to fend for her family with no source of income.

She was helped by Good Samaritans but the Covid-19 pandemic had added to her woes.

“I read a post about her on social media and went to her house to see how we could assist, ” said Kong, who is part of the party’s district voluntary welfare unit.

“She has survived so long through donations from generous people here, ” she said, adding that Santhanaletchumi has an 11-month-old boy, three-year-old girl and seven-year-old son.

Kong said she and her team helped the mother of three apply for aid from the district Welfare Department.

“Her application was approved recently and we relayed the good news to her.

“We have also been giving her RM200 and a food box every month since January, ” she added.

During a recent visit to Santhanaletchumi’s house, Kong along with her team and Tanjung Malim district councillor R. Cures Rau presented her with a RM550 welfare aid.

Rau said Santhanaletchumi would be getting the aid every month until May next year.

“We have advised her to update her address if she relocates.

“If she still needs aid, she will have to submit an application with the necessary documents by February next year.

“Her failure to do so could see the aid discontinued, ” he said. 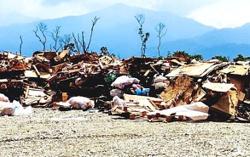