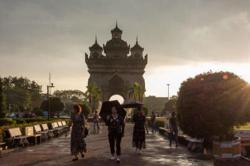 CONSUMERS are advised to lodge complaints if markets and stores say they have run out of essential items during this festive season.

This is because supply is adequate for Hari Raya Aidilfitri and these items should be replenished constantly, says the Johor Domestic Trade and Consumer Affairs Ministry.

Its director Hairul Anuar Bohro said officers have carried out price monitoring inspections at some 200 business premises throughout the state.

“Consumers in Johor should not be worried as there is enough supply of essential items for the festive season, ” said Hairul.

A ceiling price has been fixed for local beef in the peninsula and Sabah.

The price of imported buffalo meat has also been fixed, except for Sarawak.

Hairul said for the first time, a 30-day enforcement period was in place for price-controlled items, compared to 14 days during the festive season in previous years.

He said enforcement of price control on the essential items was for 22 days before Hari Raya and seven days after the celebration.

“We have enough chicken in Johor for Hari Raya although there were issues of high poultry prices during the first week of Ramadan, ’’ he said.

Hairul added that poultry sellers should lodge complaints with the ministry if wholesalers charged higher than the ceiling price during the implementation of the scheme.

Those found selling controlled items at a higher price would be served a notice under Section 21 of the Price Control and Anti-Profiteering Act 2011, he warned.

“We advise traders and companies to adhere to the price control scheme, ’’ he added.