Impressive haul: Hazlinda and Juan have saved a considerable amount of money over the years by choosing to buy used goods. — YAP CHEE HONG/The Star

There are several reasons why people choose to buy second-hand items instead of getting them brand new.

With the rising cost of living, bargains can be found in the growing market for pre-loved items.

Also, as most people are aware by now, opting for second-hand goods is a way to be more environmentally friendly in today’s throwaway culture.

Many are looking to reduce their expenditure too during the ongoing Covid-19 pandemic, as incomes may have decreased and this method allows them to live within their means without sacrificing on quality of life.

For husband and wife Hazlinda Azmi and Juan Mahussin, looking for second-hand items has become routine.

“We grew up during the early days of phones and computers, which were really expensive to buy, ” said Hazlinda, a former marketing manager.

“Back then, people used things for as long as they lasted and there was no reason to upgrade these things if they still worked.”

The daughter of a policeman, Hazlinda learnt to appreciate the things she could hold on to, as she had to move around the country several times while growing up.

“That thinking has stuck with me and my husband until today, so we don’t buy things unless they are broken.

“Besides that, starting our own business also made us look at ways to save as much money as we could, ” she said.

The couple, who had lived in Canada for two years, also developed the habit of seeking out second-hand goods while living abroad, often obtaining the items at nominal prices or even for free.

Juan remembers the time he acquired a high-end gaming computer in Canada without spending a cent.

“It was an Alienware desktop computer that came with a monitor and the owner was feeling generous during Christmas, so he offered to give it to the first person who responded, and I was lucky enough to be that individual, ” he said.

More recently, he saved about 30% on a gaming laptop when he agreed to take a shop’s display model.

“I was shopping at Low Yat Plaza and a salesperson asked me if I would be interested in taking it for RM3,000 off its retail price.

“It’s one of my biggest savings to date, ” said Juan.

When he was retrenched during the movement control order last year, Juan, who had been a designer with an events company, started a leather crafting business called BearMinima.

“At first, I went with what I thought was cheap and decent-quality equipment, but these did not last long and were not the best tools, ” he recalled.

“So I started looking for quality second-hand leather-working tools from overseas and they were going for half off and sometimes, even less.“They were not cheap, but I was saving on what I believe to be good tools that can last a lifetime.”

Over the years, the couple has purchased many items second-hand, including Japanese ceramics, decorations, stationery, clothes, furniture and sewing equipment.

It was ultimately a matter of choice, Hazlinda said, on whether to buy new or get something used.

“I have no qualms buying second-hand clothes, furniture and appliances to do my part in reducing what ends up in landfills on our planet.

“Instead of embracing the fast-fashion lifestyle, where people buy and dispose of cheap items frequently to keep up with trends, consumers are now better informed, ” she said, adding that more people were open to buying used items these days

Besides scouting for items online, Hazlinda and Juan are always on the lookout for second-hand retailers, flea markets, car boot sales, bazaars and even friends who are keen on selling or giving something away.

“It’s a bit harder now with the pandemic, but there are many things that are for sale at good prices. It just takes patience.

“For those who have a keen eye for valuable items like antiques, second-hand goods can also be a potential source of income as these items can be converted back into cash.”

As a lover of traditional crafts with an affinity for fabrics, Hazlinda also strongly believes in their preservation and brings the principle of using second-hand items into her own bag-making business, Benang Sari Accessories.

“It’s the main reason why I choose to make my goods out of traditional fabrics, ” she said.

In her spare time, she buys and restores kimono for her collection and has started to upcycle them and sentimental pieces like baby swaddles into handbags.

“Some of the kimono have been worn, while others have been in storage for years, and I convert those that have been damaged into bags so they can at least be preserved and enjoyed for many more years, ” she added.

Not only does Hazlinda create bags from used materials, she also tries to craft them with used equipment.

She uses a second-hand sewing machine, which she obtained from a friend, as well as pre-loved scissors and bamboo knitting needles for her craft.

“When I’m ready and the opportunity arises, I also plan to buy a second-hand industrial sewing machine.

“It can be bought at a good price if sourced properly, ” she said. 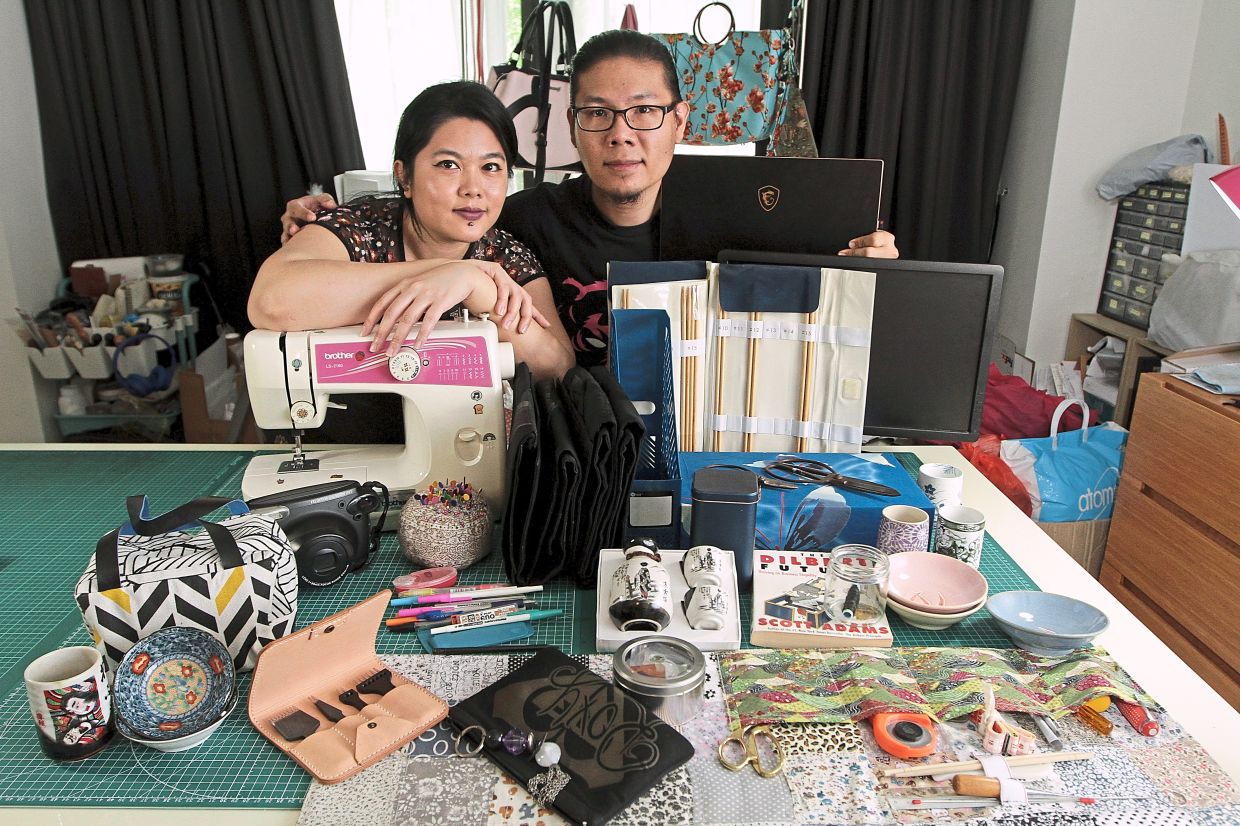 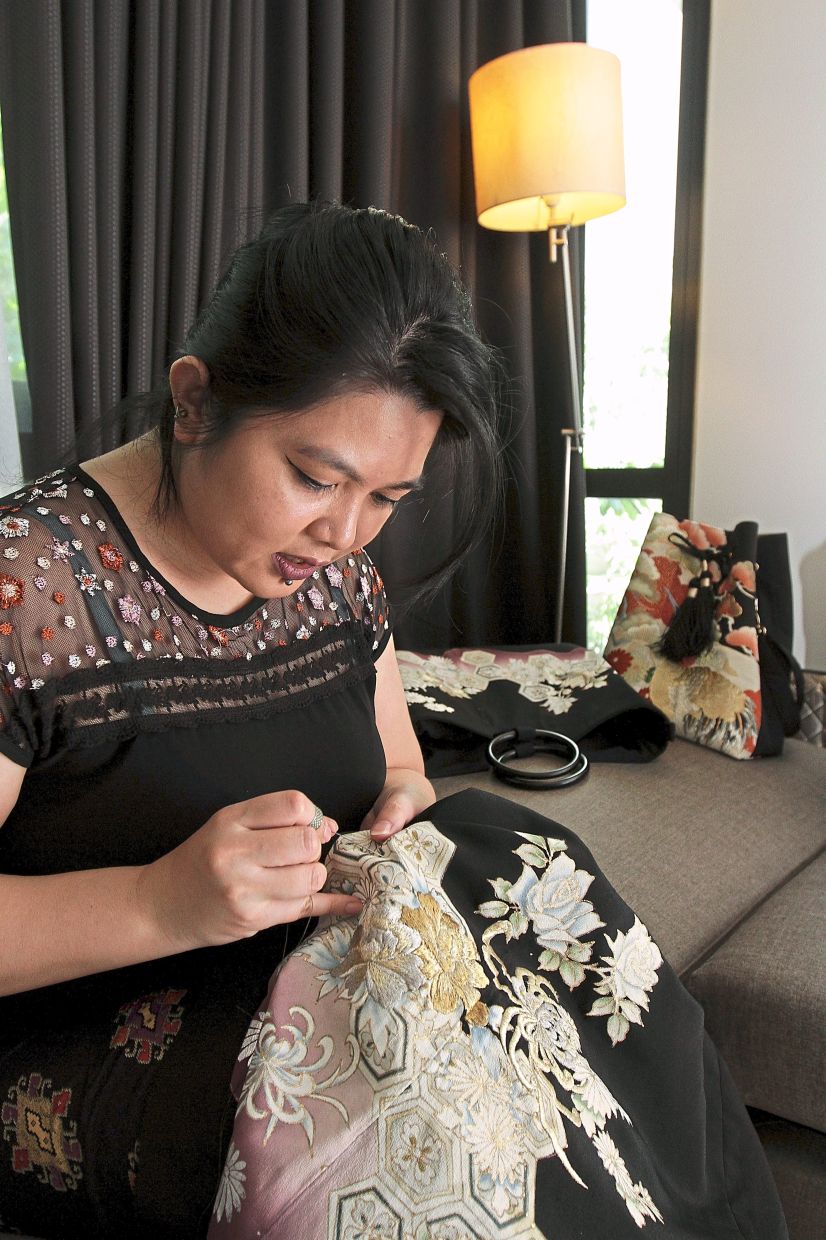 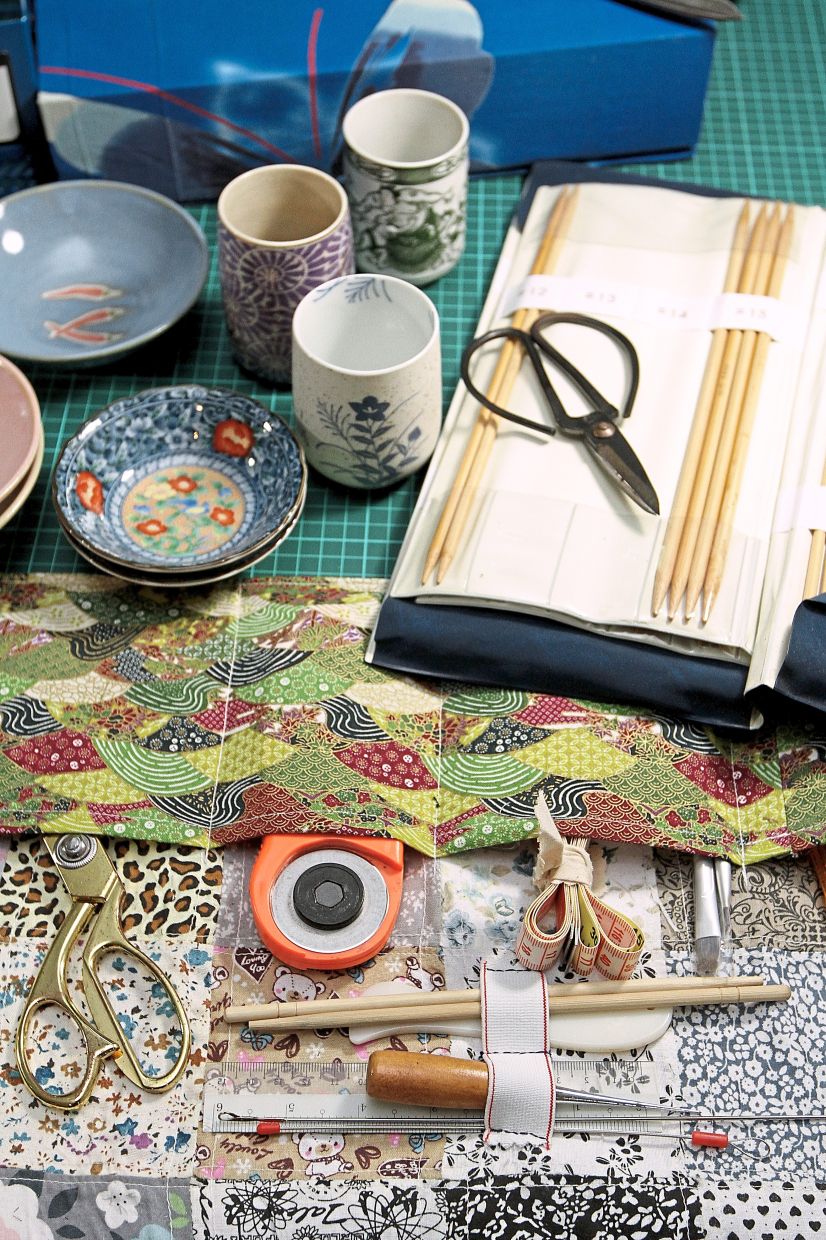 Impressive haul: Hazlinda and Juan have saved a considerable amount of money over the years by choosing to buy used goods. — YAP CHEE HONG/The Star

Juan prefers to buy used quality tools which can last longer instead of lesser-quality tools at lower prices.

Hazlinda, who makes handbags from used fabric, says she has no qualms about buying second to do her part in reducing waste.

From leather punches to laptops, many quality items can be purchase at good prices when buying used.

Hazlinda and Juan Mahussin were able to obtain items like Japanese ceramics, stationery and electronics as well as sewing and leather-working equipment for their business for less.