Functioning CCTV cameras are needed in people’s housing projects like PPR Intan Baiduri to detect those who flout the law. — Filepic

AS KUALA Lumpur City Hall (DBKL) seeks inputs, ideas and suggestions from the people as part of preparations for its 2022 budget, residents in the capital want the local authority to place more emphasis on improving maintenance and upgrading infrastructure.

Stakeholders are invited to channel proposals via the “DBKL Budget 2022 Ideas” portal.

They can do so anytime from now until May 31.

Ideas and suggestions are welcome for 10 topics, including urban clean-up, health, roads and drainage, street lighting and traffic, facilities as well as greening, garden maintenance, open space and recreational facilities.

Other major programmes focus on public and people’s housing, community welfare, management of hawkers and small traders, culture, sports and tourism as well as public parking, bus stops and footpaths.

In a statement to StarMetro, a DBKL spokesperson said 267 respondents had submitted 443 suggestions via the online platform as of April 15.

“As part of DBKL’s 2022 budget, the local authority is applying for RM200mil from Finance Ministry to cover costs for the cleaning and maintenance of road infrastructure, recreational facilities and public parks, halls and sports complexes as well as traffic management.

“Under the 12th Malaysia Plan, DBKL’s application for funds from the ministry is estimated at RM150mil for projects involving traffic dispersal, construction of community centres and markets as well as clean-up and maintenance of rivers, ” the spokesperson added.

The spokesperson urged residents to take the opportunity to contribute their suggestions as DBKL would review all ideas and proposals.

StarMetro spoke to city folk to find out their concerns and wishlist for DBKL’s 2022 budget.

In Kepong, Shirley Yue, 67, hopes to see consistent maintenance of parks and other green spaces in the city.

The Taman Intan Baiduri resident said the only public park and playground in the area was neglected and had not been upgraded for a long time.

“This is a beautiful park, with large open spaces and even basketball and badminton courts.

“Unfortunately, it has not been well maintained and there is water ponding on the courts, making the space unusable, ” she said.

Yue highlighted that many of the senior citizens in the area used the park daily for tai chi and other activities.

“We need the space to be safe and user-friendly, but that is not the case presently.”

While projects aimed at improving residents’ quality of life had been implemented, he said DBKL still fell short in following through with upkeep of these facilities, for example the River of Life riverwalk project.

“The riverside walkway was upgraded from Dataran Merdeka to Mid Valley via Brickfields.

“But there were some defects which were only resolved when we highlighted the matter to the Kuala Lumpur mayor (Datuk Seri Mahadi Che Ngah).

“Only then was action taken, ” he added.

Naidu also felt that a targeted approach to get stakeholders’ feedback for the 2022 budget would work better.

“But there are none this time around.

“Although we understand the limitations of having such gatherings during the Covid-19 pandemic, it can be done in smaller groups in each parliamentary constituency, ” he suggested.

Security and enforcement was another aspect that should be given priority, said Khairul Anuwar Yusoff.

The 56-year-old, who is PPR Intan Baiduri Blok A chairman, said there was a need for closed-circuit television cameras that were in working condition to detect those who flouted the law.

“We have about 12 CCTV cameras which are not functioning and need to be fixed.

“Another 18 CCTV cameras have been installed in the lifts by DBKL to detect and prevent vandalism.

“We do not have access to the recordings, so we have no idea if any action has been taken against the perpetrators, ” he said.

With more than 9,000 residents living in some 2,000 units there, Khairul said DBKL and residents should work together to tackle issues within the complex.

“A few months ago, we highlighted the issue of tenants who were throwing rubbish irresponsibly from the top floor.

“Although we provided DBKL with details of the offenders, no action was taken.”

On a different note, Khairul hoped that there would be an allocation to reopen a community clinic in PPR Intan Baiduri.

“The clinic was closed just before the movement control order last year and has yet to reopen.

“It was visited by many, especially the urban poor and the disabled, ” he said.

“For the past few years, the Federal Territories Ministry has concentrated on affordable housing by partnering with private developers.

“It is time to bring back PPRs and DBKL can impose a higher rent compared to the current rate of RM150, ” he said.

Yee also said that although DBKL had come up with a flood mitigation plan, the implementation was slow.

“The only way to resolve this is to place the management of the city’s entire drainage system under DBKL.

“At present, smaller service drains come under DBKL while the others are under the Drainage and Irrigation Department, ” he noted.

He added that cases of illegal dumping also continued to be a challenge and a more holistic solution was needed. 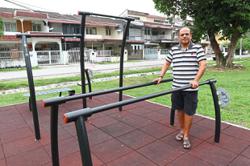