IT’S funny how life imitates art when it comes to human-wildlife conflict and its repercussions.

Fifty years ago when Bollywood blockbuster Haathi Mere Saathi or “Elephants are my friends” hit the screen, there was not a dry eye among the audience.

The story about an orphan’s relationship with four elephants triggered a wave of emotions. It was heart-wrenching to watch the animals die, even if it was just on the silver screen.

Fast forward to modern-day Sabah and the story is the same. Each time a Borneo Pygmy Elephant is found dead, especially under suspicious circumstances, the news is met with outrage.

For days, and sometimes weeks, the public will call for remedial measures to save these gentle giants which are found only in Sabah.

Over the years, the tragic story of elephant deaths has played out time and again.

The latest unfolded in mid July 2019, when a stranded month-old pygmy elephant calf was rescued by Sabah Wildlife Department rangers from a plantation in Tawau on Sabah’s east coast.

The calf named Nita had suffered injuries to one of her limbs but was otherwise in good health.

Videos and pictures of the baby pachyderm rubbing shoulders, as it were, with her carers at the Borneo Elephant Sanctuary were shared widely.

But things took a turn for the worse earlier this year. She was seen limping inside her enclosure at the sanctuary after her injury flared up, with veterinarians ascertaining that it could not be healed.

“Despite intensive care, Nita’s condition got worse. The fracture she sustained was beyond repair, leaving the veterinarians with little choice but to end her misery.

“We grieve the loss of such a sweetheart, ” was how Sabah Wildife Department director Augustine Tuuga announced that Nita had to be put to sleep on March 21.

When the news broke, the question on the minds of some conservationists was whether more could have been done to save Nita’s life at the elephant sanctuary in the east coast Kinabatangan district operated by the Wildlife Department.

Touted as the first and only sanctuary of its kind in Borneo, it has helped to rehabilitate injured elephants back to the wild after it was set up about a decade ago with private funding.

Sabah’s rangers and conservationists face a mammoth task in conserving not only the endangered elephants but also other wildlife, including orang utan and sun bears.

Pygmy elephants continue to face a host of threats due to habitat loss, degradation and fragmentation of their natural habitats.

Sadly, despite decades of conservation efforts, there is still no clear indication of any increase in the elephant population estimated to be around 1,500 to 2,000 in the wild.

Over the past four years, dozens of elephants have died in mysterious circumstances.

To date, post-mortem reports have been inconclusive though in some cases, wildlife investigators suspected foul play, including poisoning.

There have been several success stories in addressing the human-elephant conflict in some areas, especially those operated by large plantation companies.

But the threat remains as farmers, villagers and planters find them a menace to their crops.

An elephant herd can wipe out large acreages of freshly planted cash crops overnight in the east coast districts of Sabah.

Some do turn to wildlife rangers to shoo away the elephants or instal electric perimeter fencing to keep the mammals at bay.

But despite stiff laws, others have been known to take more severe actions that included hurting or even killing the elephants in the name of defending their property.

The brutal Jan 21 killing of an elephant found at a plantation in Sabah’s central Tongod district was described as an act of revenge.

The jumbo was shot, its body parts severed and even skinned by the perpetrators.

Like most of the other suspicious deaths of elephants over the years, the perpetrators remain unknown.

Therein lies the problem: Will anyone be made to answer for these wanton deaths?

Or will the usual hue and cry just keep repeating itself each time a pygmy elephant is found dead?

Are we going to do something about stopping these elephants from meeting the same fate as the Sumatran Rhino which was declared extinct in Sabah after not being seen in the wild for over five years?

Although many NGOs are doing good work, successes have been limited to certain areas or plantations.

“Wildlife rangers cannot be in every place, they have limited resources.

“What we really need is across-the-board cooperation between all stakeholders to fully protect our elephants, ” said a veteran conservationist who declined to be named.

Other concerned groups feel that it is time Sabah stand up to such offenders in the real sense of the word, regardless of whether they are big companies or smallholders.

“We have to make it a priority to protect our wildlife and strike a balance with development.

“It could be done but I would say we might be fighting a losing battle.

“Efforts like getting plantations to work together don’t seem to be gaining much traction, while wildlife corridors are slow to materialise.

Given the pull of development, it appears that these magnificent creatures are already in a tight spot.

In the present circumstances, they may be finding it tough to be our friend. 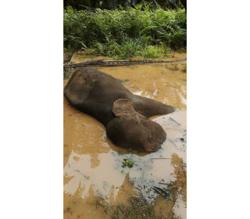