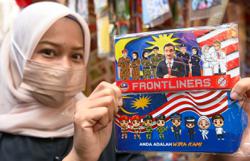 Kuala Lumpur City Hall (DBKL) said a part of Jalan Tuanku Abdul Rahman – from its intersection with Jalan Esfahan (after Sogo shopping centre) until Jalan Melayu – would be closed on Saturdays to make way for the night market.

The night market will operate at the temporary location on April 17, April 24, May 1 and May 18.

Regarding Ramadan bazaars, the local authority said they would operate from 3pm to 8 pm during the fasting month at 65 locations in the federal capital.

DBKL said of that total number, 63 locations would be supervised by the organisers of the bazaars while DBKL would supervise the remaining two --- at Taman Tasik Permaisuri carpark (near Kuala Lumpur Football stadium) and Jalan 4/38A in Taman Sri Sinar, Segambut (near Wisma Suhati).

“Visitors to Ramadan bazaars are required to comply with the standard operating procedures (SOP) set by the National Security Council (MKN), which includes wearing face masks, having their body temperature scanned and checking in with the MySejahtera app, ” DBKL said in a media statement.

Meanwhile, the local government said the Aidilfitri Bazaar would resume operation at its original site – Lorong Tuanku Abdul Rahman – from April 17 to May 12.

The festive bazaar, which had previously operated along Jalan Raja, was cancelled last year due to the Covid-19 pandemic.

DBKL said 208 traders would operate from 10am to midnight at the bazaar that would start behind the Campbell complex and stretch all the way to its intersection with Masjid India.

Visitors and the organisers who violate the SOP at the bazaars would be issued compound notices of up to a maximum RM10,000 and RM50,000, respectively, the authority added. --- Bernama