AFTER the defection of its MP, the Indera Mahkota PKR division has now resolved to choose from among its ranks to challenge for the parliamentary seat in the upcoming general election.

“After the episode of betrayal that saw the defection of the Indera Mahkota MP, who was a parachute candidate in GE14, the grassroots and the leadership are tired of clarifying the party’s stance every time we face the people.

“With the selection of a local candidate who is professional, qualified and loyal to the party as well as close to the division and the people, it will instil confidence in the PKR machinery to highlight the candidate, ” he said.

Indera Mahkota MP Datuk Saifuddin Abdullah was among the MPs who joined Datuk Seri Azmin Ali’s faction in quitting PKR during the political upheaval that brought down the Pakatan Harapan government more than a year ago.

Saifuddin was previously an Umno member and served as the Temerloh MP until his defeat by PAS’ Nasrudin Hassan in the 2013 elections.

He subsequently quit Umno in 2015 and joined PKR. In the 2018 elections, Saifuddin contested the Indera Mahkota parliamentary seat and won with a 10,950 majority.

He was appointed as foreign minister in Tun Dr Mahathir Mohamad’s Cabinet after that.

Following his defection, Saifuddin was appointed the Communications and Multimedia Minister and is now with Parti Pribumi Bersatu Malaysia.

Lee, who is the Semambu assemblyman and PKR treasurer-general, also said his division approved

a motion to reject any form of political cooperation with Dr Mahathir and his party vehicle.

The Indera Mahkota division was one of 10 PKR divisions in Pahang that carried the motion during their annual general meetings.

“In general, these divisions are calling on PKR to reject any cooperation with Dr Mahathir because he betrayed Pakatan Harapan by intentionally resigning as prime minister without consulting with the presidential council.

“We also believe Dr Mahathir does not want to see Datuk Seri Anwar Ibrahim become the prime minister. Dr Mahathir really wanted to destroy Pakatan when he proposed to become prime minister for the third time under a unity government.

“Due to these factors, Dr Mahathir is not qualified to fight alongside PKR and Pakatan, ” Wan Fauzuldin said when contacted.

He added that should many other divisions carry the motion, then the party would debate the matter in its national congress. 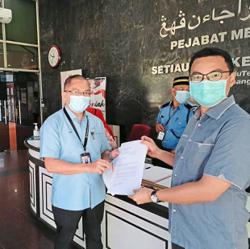