(From left) Norlela, Ong, Chong Eng, Lean Kee and other participants at the launch of the state-level International Women’s Day celebration at The Light Hotel in Seberang Jaya.

THE theme of this year’s International Women’s Day celebration – ‘Choose to Challenge’ –is proven to be a meaningful one, said Penang women and family development committee chairman Chong Eng.

“If we observe the implicit meaning of the word ‘challenge’, it is like a call to test the extent of our limitations, ” she said.

Chong Eng said by ‘choosing to challenge’, women are able to prove that change can happen in themselves, family, society, country or the world.

“We have many women who came forward to take part in the #ChoosingToChallenge video clip contest, ” she said at the recent luncheon held for International Women’s Day in Seberang Prai.

Ten of the finalists received RM500 each for their winning video clips that depicted many aspects of women in society.

“You have responded to the call to share your experiences through this competition.

“Naturally, each of us have our own challenges, and you have shared how you faced and overcame those challenges, ” she said.

Chong said women’s role in every level of society, particularly in public governance continues to be a priority in Penang.

“The gender inclusiveness policy adopted by the state government from 2019 is to ensure a 40:40:20 gender balance, that is 40% women, 40% men and 20% open to women and men, by 2030 so that no single gender dominates the decision makers.“In achieving the minimum target of 30% at the decision-making level, the state approved a proposal to appoint at least 30% women as city councillors and board members in state government subsidiary companies.”

She said starting from this year, the state government has stipulated that the appointment of village community management council members must also consist of a minimum of 30% or five women.

“In ensuring that women are not left behind at every level of decision-making, Penang government is in the process of increasing the representation of women in the State Legislative Assembly through Additional Seats For Women or Top-Up Women-Only Additional Seats (Twoas), ” she added.

Chong pointed out a wealth of evidence, including studies by United Nations, showing that sufficient women’s representation effectively addresses issues like domestic violence and sexual harassment.

“This is because women understand these issues better, based on their life experiences and responsibilities.

“This issue brings a negative impact to all individuals as well as the development of the country, ” she said.

Chong called on women in Penang to step forward and play a role in politics and public governance.

“We need more women to be involved in politics. Come on, choose to challenge. If not you, who else?”

“These initiatives are in line with the vision of Penang2030, a family-focused, green and smart state that inspires the nation, ” Chong told attendees at the International Women’s Day luncheon. 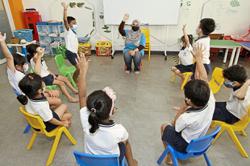