(From left, in front) Jagdeep, Chow and Rozali checking out the PSP system at City Hall. With them are Yew (dark shirt), Gooi (blue shirt) and Abdul Halim (behind Rozali). — Photos: LIM BENG TATT/The Star

THE Penang Smart Parking (PSP) system has brought in RM16.4mil in revenue to both local councils since its inception in August 2019.

He said e-Coupon had been developed with the appointment of 422 registered agents on the island and mainland to assist senior citizens and those without smartphones.

“I hope that Penang will be regarded by other states as a pioneer of smart initiatives such as the PSP, ” he said after launching the PSP mobile app version 2.0.3 at City Hall, George Town.

“We are happy that Penangites adapt well to technology and hope that Penang can be used as a lab for various tech initiatives by interested parties.

“We will look into preparing a zone for interested parties which will act as a catalyst initiative for other local governments in the country and even in Asia.”

The app was first launched on Aug 19,2019, to replace the conventional parking coupon system.

“With the cooperation of HeiTech Padu Berhad, the parking lots under MBPP and MBSP have been fitted with sensor technology which will make it convenient not only for Penangites but also for visitors who wish to find a parking lot and make cashless payment, ” said Chow.

He said all the 12,000 parking lots owned by MBPP were now fitted with sensors. On the mainland, only 3,000 out of 24,000 council parking lots have sensors with the balance 21,000 sensors expected to be installed by September.

“When embracing new technology, we experienced some teething problems.

“But we improved because we cannot be left behind.

“The PSP app will support other smart initiatives, for example, cashless transactions.

“We are in discussions with firms to integrate the systems, ” he said, adding that the upgraded PSP system was one of 73 smart projects in Penang.

“With just a click, they can navigate to the parking spots.

“This app will not only make driving and parking convenient but also help reduce traffic jams.

“We hope this partnership with the Penang government will make Penang a reference point for the whole country, ” he said. 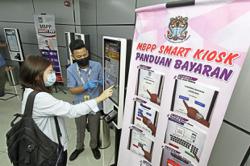