KUALA Lumpur City Hall’s (DBKL) noble plan of community and urban farming was in need of an impetus, which as it turned out laid in the Covid-19 pandemic, as unwelcome as the disease might be.

The plan was kick-started and as a result, various unsightly sites in the city were turned into pockets of greenery.

StarMetro ventures to two community farms in the city that have been transformed by residents, some of whom have lost their jobs and are seeking alternatives in earning a living.

School bus driver Sabariah Salini used to daydream about starting her own community garden where she could prepare meals using vegetables grown in her own backyard.

The 53-year-old, who had worked in the Royal Malaysian Air Force, always wanted her own garden to manage.

The opportunity finally presented itself last March when the country was placed under the movement control order because of the pandemic.

“I would not say it was a blessing because there was nothing to rejoice about the pandemic. PPR Wangsa Sari residents have put empty detergent containers to good use as flower pots, adding colour to the garden.

“But I was without a job and had plenty of free time with nothing to do.

“So I took the chance to finally realise my dream to start a garden, ” she said.

Sabariah was not the only one with that dream.

She and a handful of her neighbours had been mulling the idea of urban farming for some time even before the pandemic struck.

Rokiah Baharum, 60, and her husband, Abdul Rahman Aziz, 62, had also often thought about setting up a small vegetable garden near their flat.

At another block, 54-year-old Salmah Sailan, who works as a post-natal therapist, always wanted to build a garden growing herbs essential for post-partum recovery.

Meanwhile, Mihat Sadon, 69, was thinking of setting up a fish pond rearing catfish and tilapia. Maziah showing the sunflower that she planted.

When the MCO was enforced, he made up his mind to get started on the project.

They all live in Seri Malaysia People’s Housing Project (PPR) in Desa Petaling, Kuala Lumpur, which is within walking distance to the Sungai Midah flood retention pond. The pond is located beside the Southern Integrated Terminal in Bandar Tasik Selatan.

The area is next to a small hill overlooking the pond, which makes it an ideal place to set up a community garden or a little farm.

However, the land was not maintained so it was overgrown with bushes and had wild animals like snakes living there.

It was also a hangout for drug addicts and pickpockets, besides being a rubbish dumping ground.

But Sabariah and her neighbours decided to team up and take on the challenge. Mihat tending to his fish pond.

Along with Rokiah and the other residents, they got together under the guidance of fellow Seri Malaysia resident, Nor Zaidi Maini, and took six weeks to transform the area sufficiently to prepare it for farming.

Zaidi became chairman of the Seri Malaysia Community Farm that measured about 1.2ha.

Word got out about this initiative and soon more people from PPR Seri Malaysia as well as other nearby neighbourhoods — PPR Desa Petaling, Sri Malaya Apartment, Kampung Malaysia Raya and Kampung Malaysia Tambahan — pitched in to farm the land.

But then the landowner — Kuala Lumpur Drainage and Irrigation Department (DID) — heard about the project and were unhappy that residents were farming on the said plot without the department’s permission.

Knowing the importance of the project to the residents, DBKL intervened and signed an agreement with DID to allow the group to continue to farm the land.

Work to clean and prepare the land started last October.

It involved more than 60 residents who visited the site every morning and evening to work the land. “It was incredible to see the determination and discipline shown by the residents.

“The MCO brought them together and their display of leadership qualities and team spirit was just inspiring.

“I have not seen people that enthusiastic about a gotong-royong before, ” said Mohamad Asrak.

For the residents, the work was a welcome respite and a lifeline to better things.

“My dream of setting up a herb garden focusing on post-partum recovery is now a reality, ” said Salmah.

“The garden is thriving and we have all sorts of herbs.

Salmah attributed her thriving herb garden to Mohamad Asrak, who not only guided the farmers on what to do, but also rolled up his sleeves and started helping the community by doing work on the land with the residents.

Mihat has also successfully set up two fish ponds at the site. Sabariah, a school bus driver, working on her vegetable garden.

“I spent about RM500 to buy the fish, and today, three months after I set up the pond, I have 2,000 catfish and tilapia.

“I don’t plan to sell any of them yet.

“For now, I want to give the stock to friends and residents.

“After that, I will perhaps venture out commercially, ’’ he said, adding that currently, caring for the fish ponds was more of a hobby.

Over the hill, projects to rear chicken and quails for eggs are already in progress.

Zaidi, who oversees the residents’ farming endeavour, said that as soon as one section of the land was cleared, they immediately got to work tilling the land.

“We wasted no time. We just wanted to see how much we could do.

“Everyone worked together as a team and today we can see the fruit of this effort, ” he said.

Residents who live nearby but are not part of the farming efforts are urged to leave a token or donation in a tin placed at the site if they want the vegetables for their own consumption.

At PPR Wangsa Sari, about 20 residents who were tired of being cooped up inside their 800sq ft flats decided to transform a tiny plot of land into a vegetable and flower garden.

The land parcel is a little smaller than a unit of their flats in Wangsa Maju.

They used recyclable items such as empty detergent containers, water bottles and poly bags made out of old banners to plant the vegetables and flowers.

Today, despite being the smallest community garden in the city, it is also one of the most economically viable ones.

“It all started last April when a few people got together and decided to build a garden, a place where we could relax, ” said Zaiton Abdullah, 62.

“Many of us had nothing to do and no place to go during the strictest phase of the MCO.”

She added that the residents could not stay inside their flats all day long as the space was very cramped. “The only outdoor space was so small. It was also an eyesore with rubbish and overgrown bushes.

“So we started cleaning it up and paving the way for a vegetable garden, ” said Zaiton.

She said they forked out their own money to buy the farming equipment and gardening tools.

“Today, we have people buying vegetables from us.

“And when we have any events attended by officers from government agencies, the food we cook are fresh produce from our community garden, ” she added.

“There is even demand for our flowers, ” said Maziah Osman, another member of the community garden team.

“I was tasked to handle the flower section, which is now one of the self-sustaining projects here, ” said the 67-year-old.

Fellow PPR Wangsa Sari resident, Fadhil Md Noor, 52, attributed the project’s success to the fact that it was self-sustainable and the products were sold at a cheap price.

“People are looking for fresh produce grown organically and from farms close to their homes, ” he said.

He added that it was a new norm to not only plant organic food but reduce carbon footprint. 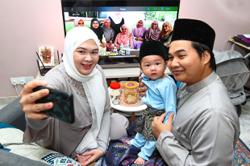