A photo taken by a resident in a high-rise building showing dead fish floating along the left part of Sungai Kuyoh.

RESIDENTS of Park Lane OUG in Kuala Lumpur woke up one morning to the unpleasant sight of thousands of dead fish washed along the riverbanks of Sungai Kuyoh near the Kampung Bohol flood retention pond.

It is believed that the dead fish were probably washed down from upstream Sungai Klang and ended up along the edges of the riverbank.

Sungai Kuyoh is a tributary of Sungai Klang.

For the residents, the sight of the silvery dead fishes was disturbing.

“I was on the 29th floor and I noticed white objects floating and thought they were styrofoam cups, ” said Gunasegaran, a resident from the area.

“Later in the afternoon, I noticed a large pool of white stuff floating on the river. I used binoculars and saw thousands of dead fish, ” he said.

He later called the DBKL Seputeh branch to report the matter but no one answered his calls.

Alice Kee, another resident, said she was shocked and scared to see so many dead fish.

“They were all washed away the next day after a rainstorm, ” she added.

In Brickfields, residents who were out for a walk along the Sungai Klang walking path also spotted floating dead fish being washed away downstream.

In some areas the dead fish ended up along the edges of riverbanks and monsoon drains and even clogged up log booms and gross pollutant traps placed to trap rubbish.

“They were coming from upstream and I was concerned that it could be due to contamination or something else, ” said R. Jeevamony, who lives in the nearby Palm Court apartment.

When contacted, the Federal Territory of Kuala Lumpur environment department (JAS WPKL) said it would investigate the matter.

In 2019, thousands of dead fish were found floating along Sungai Gombak and Sungai Klang, sparking concern of possible river contamination.

Some even used the Citizen’s Eye, a mobile application app to report the matter by uploading pictures of the dead fish.

The app was developed under the River of Life Public Outreach Programme (RoL-POP) for residents to report on river pollution.

The then Kuala Lumpur mayor Datuk Nor Hisham Ahmad Dahlan who was alerted to the incident immediately ordered an investigation.

JAS WPKL confirmed that the fish died due to lack of oxygen and not from pollution.

Heavy rains had caused the river’s sediments to rise due to high currents, which blocked the gills of the fish. 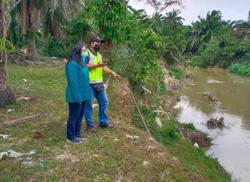