The Tanjung Piai National Park is famously known for its vast mangrove forest located at the southernmost tip of the Asian continent.

THE Pontian district in Johor is home to one of the most important mangrove ecosystems in the world.

Located at the southernmost point of the peninsula and mainland Asia, and only 70km from Johor Baru, is the Tanjung Piai National Park.

Spanning 325ha, it was recognised by the Ramsar Convention as a Ramsar site or Wetlands of International Importance in 2003.

“The rate of erosion is 3.2m to 12.5m per year, ’’ said Prof Kasturi who is from the university’s Built Environment and Surveying Faculty.

A major consequence of this is the loss of breeding grounds of many marine organisms such as fish as well as terrestrial animals including monkeys, she highlighted.

She said trees along the coastline protected inland areas from waves, thus reducing coastal erosion, flooding and loss of property and lives.

Prof Kasturi said too little attention had been been paid to the potential of mangroves in recreation and tourism.

“Other large mangrove areas like Sungai Pulai in Iskandar Malaysia can also be considered for ecotourism, ” she said.

Among potential mangrove tourism activities are boating, bird watching and wildlife spotting of animals such as manatees, dugong and crocodiles.

Hiking, canoeing, kayaking, fishing and stand-up paddle boarding are other recreational sports that can be carried out in such areas.

“Activities like these are common in mangroves in North and Central America and in the Caribbean, ” said Prof Kasturi.

Data from Forest Research Institute Malaysia showed there were 26,818ha of mangrove forests in Johor as of 2017.

However, there are signs that mangrove forests are depleting.

“The decrease could be due to reclamation for development, agriculture and aquaculture activities as well as natural processes like erosion, ” Prof Kasturi explained.

She said clearing of mangrove forests would also lead to global warming as there would be fewer trees to store carbon.

“Mangrove forests are home to countless flora and fauna that depend on an intact ecosystem to survive.”

She stressed that some of the animal and plant species that live in Johor’s mangrove forests were endemic.

“If our mangroves are cleared for upscale development or industry, coastal communities like fishermen will also have fewer places to catch seafood, ” she added.

Serina pointed out that mangroves were just one component in a highly connected and deeply intertwined ecosystem.

She said mangroves connected land to the sea.

“If you take away one component of this, a part of the link is broken.

“Many animals depend on that connection being whole and complete, ” she emphasised.

She said there were species of fish that bred in mangroves, went out to feed in the seagrass and spawned in deeper waters.

“If any of these parts of the seascape are removed, then a phase in a species’ life cycle is disturbed and this can lead to serious consequences, ” she reiterated.

He pointed out that as the ability of water to carry sediments depended on the velocity of the flow, slowing the current would result in sediments settling.

He said data from Malaysian Centre for Geospatial Data Infrastructure showed that the total mangrove area in Johor was approximately 223.2sq km.

“Mangrove rehabilitation is one of the ways to maintain the mangrove ecosystem, by replanting mangrove trees.”

However, he said two studies had shown that the percentage of survival of mangroves after six months was relatively low, between 30% and 46%.

“There is no sign of survival when mangrove trees are planted without any protection, ” he said.

He added that a long-term planting programme must continue, to preserve the ecosystem.

“In general, the roots of mangrove trees slow down water currents that flow over it, namely tide and river flow, ” he said.

Oil slicks, he added, from passing ships also had a negative impact on the health of mangrove forests in Pontian as they suffocate tree roots. 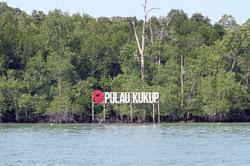