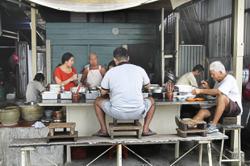 Ong preparing the dishes for the porridge at his stall in Muntri Street, George Town, Penang. — Photos and video: ZAINUDIN AHAD/The Star

Chances are the popular Teochew porridge haunt in Muntri Street may make a comeback after a short break.

Its owner Ong Tai Buan, 75, said for now, he would rest at home after being in the business for over 60 years.

“I started almost six decades ago as a helper to my father-in-law.

“For the time being, I’ll just rest at home.

“I will definitely miss my regular customers who have become my friends.

“I am still considering if I should continue the business, ” he said when met at his shop located in the heart of George Town’s heritage area.

On Friday, shutters came down on the shop popularly known as Tai Buan Porridge but not before a large crowd made a beeline to sample their favourite dishes for the last time.

The queue stretched for at least 100m and the scorching heat failed to stop the regulars from savouring the pieces of duck meat, pork innards, pork belly and tofu gently braised in soy sauce.

Among them was office assistant Saik Yew Chong, 21, who hopes the shop will reopen soon as it bears most of his childhood memories.

“My parents used to bring me here at least once a month when I was young.

“I love the preserved radish egg and braised duck meat to go with my porridge.

“I will definitely miss the gu zao wei (loosely translated to mean ‘old favourite’ in Mandarin) and I hope that a traditional taste like this will be preserved for generations to come.

“This is our heritage, ” said Saik, who brought a container for takeaway for his aunt.

Another patron, who wished to be known as Cheah, 55, said he had been frequenting the stall since moving to Penang from Johor many years ago.

“I am Teochew and I found this lovely place some 20 years ago.

“After learning that the stall will be closed, I came on Thursday for takeaway for my family but the porridge was already sold out when I reached here.

“I came earlier today to make sure I get my cravings satisfied.

“I queued up for around 40 minutes and managed to get egg, tofu and braised meat for my family.

“I hope the younger generation will learn to prepare the traditional food in Malaysia, ” he said.

Event planner Alice Ooi, 30, said she dropped by with her colleagues for lunch after learning that the stall would be closed temporarily.

“The Teochew porridge is delicious and has traditional flavours.

“I especially like the pickled vegetables and preserved radish egg, ” she said.

For those not familiar with Teochew porridge, it is watery and commonly served with salty accompaniments like salted eggs, salted vegetables, and anchovies with peanuts.