WITH Kuantan in Pahang now declared a city, development must come with the forming of a community with a first-class mindset, says Pahang Mentri Besar Datuk Seri Wan Rosdy Wan Ismail.

He said the administration was committed to formulating development strategies in line with this.

Among the strategies, said Wan Rosdy, were to provide quality and comfortable housing with adequate infrastructure and facilities; improve functional areas that would serve as physical, social and cultural activity centres; increase access to knowledge through education; and develop a prosperous, healthy and resilient community.

Apart from the administrative and social aspects, Wan Rosdy said the upgrade of Kuantan to a city would contribute to economic development to be enjoyed by the locals.

He said this could even overflow to cover the suburbs and nearby towns, such as Pekan and Maran.

“Facilities such as roads, telecommunications and transport infrastructure will be further enhanced to meet current needs and increased expectations of the population.

“One project that will trigger a change in Kuantan, in particular, is the 640km East Coast Rail Link that will connect two major ports, namely Port Klang and Kuantan Port.

“It can offer employment and entrepreneurship opportunities for locals, ” said Wan Rosdy.

He added that some might be sceptical of Kuantan’s capabilities to fulfil its obligations and new responsibilities as a city but its abilities were backed by the excellent record of the former Kuantan Municipal Council (MPK).

“Various achievements were made, to the point of being recognised as the best local authority in the country.

“Among them, MPK was awarded Sustainable City 2020, for the municipal council category, in conjunction with the national level World Town Planning Day.

“This award is very meaningful because it depicts Kuantan as a very comfortable, beautiful and suitable city to live and visit. It is supported by the recognition of Kuantan as one of the 10 happiest cities in Malaysia in conjunction with International Day of Happiness 2020, ” he elaborated.

Wan Rosdy added that MPK had achieved 5-star status every year since 2015, under the Local Authority Star Rating System and based on the World Bank report related to “Doing Business” in Malaysia in 2020, Kuantan ranked second in terms of facilitating construction permit matters in the country.

“With all the previous outstanding records, I am confident it is a clear measure and indicator that Kuantan is on the right track, standing as high, sitting as low with other famous cities, and will succeed with excellence as a city.”

The local government system was first implemented in Kuantan on Aug 1,1913, with the establishment of Kuantan Sanitary Board which was responsible for hygiene, health and development control.

In 1937, it was replaced by Kuantan Town Board and after almost 16 years under this system, this board was in turn upgraded to Kuantan Town Council with an administrative area of only 16sq km that focused on the Kuala Kuantan sub-district.

On Sept 1,1979, the town council was upgraded to a municipality with an administrative area expanded to 324sq km, which covered four sub-districts, namely Kuala Kuantan, Ulu Kuantan, Beserah and Sungai Karang.

Meanwhile, Kuantan MP Fuziah Salleh congratulated everyone who contributed to the transformation of Kuantan into a city but said the people should be prepared to anticipate challenges at the same time.

She said development would always come with a price and studies of other cities had shown that it was associated with pollution, higher crime rates, rise in cost of living, social problems, higher traffic flow that leads to more congestion, increased squatters, urban poverty and other issues.

“It is my sincere wish, hope and prayer that our beautiful charming city of Kuantan will not go down the same path. Therefore, let us renew our commitment to implement and hold true to the Local Agenda 21 that we signed quite some time ago.

“Let the authorities and the people of Kuantan pledge their commitment to the Sustainable Development Goals in everything that we plan and do. 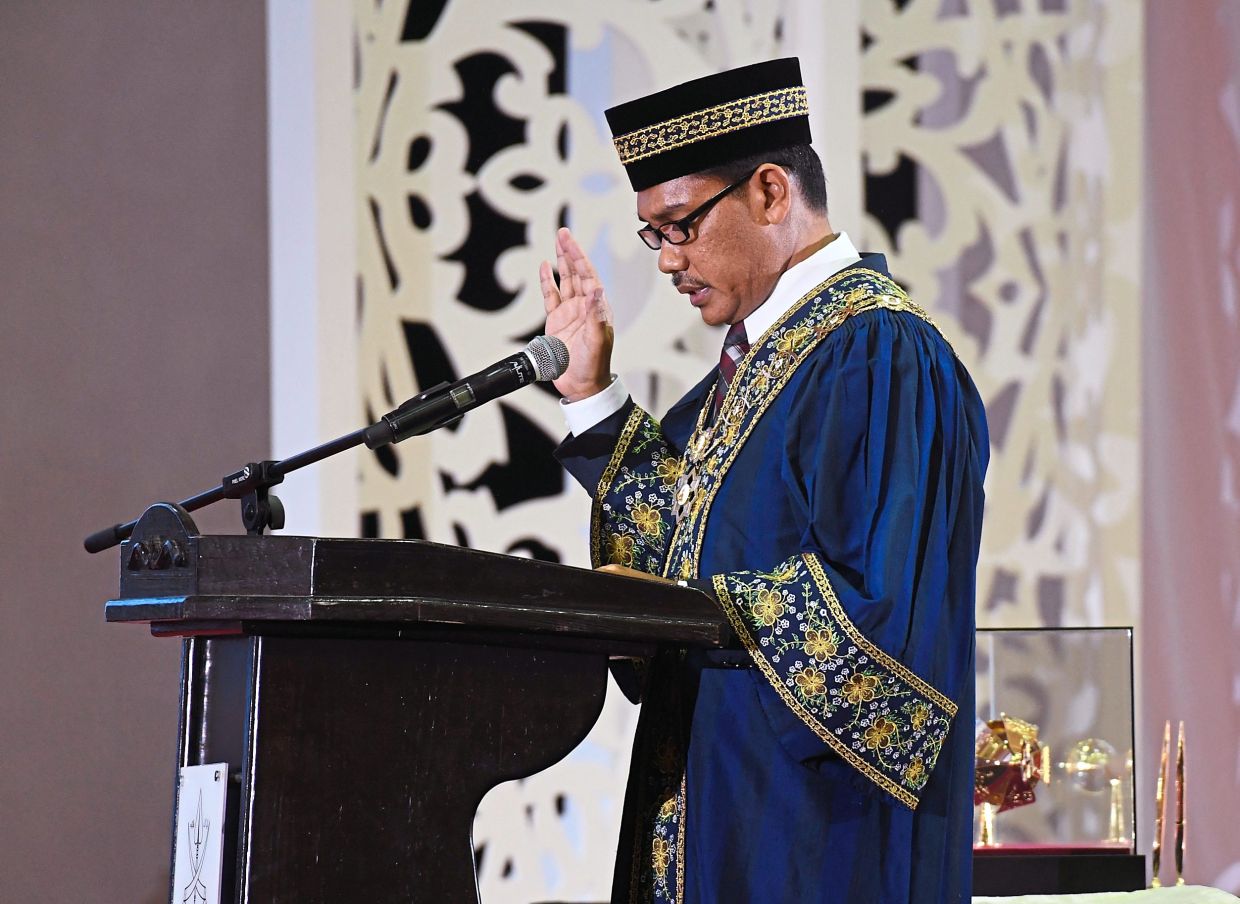 Artist Raja Mohd Faiz Syazarim Raja Abdul Karim, 26, working on a mural in Jalan Besar, as part of Project Zerosix, an initiative to beautify Kuantan in the run-up to the proclamation of the city.

(Far left) The Regent of Pahang (centre) flanked by Works Minister Datuk Seri Fadillah Yusof (right) and Wan Rosdy during a fireworks display at the celebration.

Hamdan taking his oath of office before Sultan Abdullah at the proclamation of Kuantan as a city and officiating of Kuantan City Complex.

Jambatan Putra was virtually inaugurated alongside Menara Kuantan 188 by the King in a ceremony in Kuantan, Pahang. The new 451m bridge across Sungai Kuantan serves as an alternative route to reduce traffic on the existing bridge linking Tanjung Lumpur and Bandar Indera Mahkota.

The King signing the proclamation document as the Queen (right) along with (from left) Muhyiddin, Zuraida and Noorainee look on. 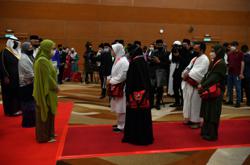